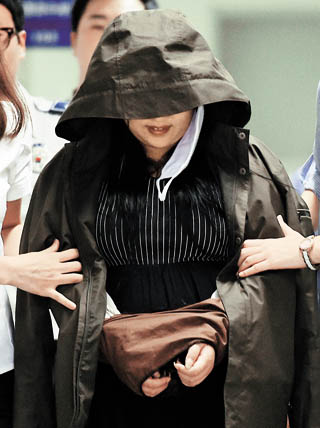 Police have arrested a 26-year-old woman over allegations that she secretly videotaped the inside of female dressing rooms at local water parks and an outdoor pool with a hidden camera in exchange for money.

The Yongin Dongbu Police Precinct in Gyeonggi said on Wednesday that it is questioning the suspect, surnamed Choi, over sexual offense accusations.

“The suspect is believed to have recorded activity in the dressing and shower rooms at three water parks in Gyeonggi and Gangwon, and at an outdoor pool in Seoul from July 16 to Aug. 7,” a police officer said. “She sold the video to one man three different times, for 300,000 won ($252) to 600,000 won at a time.”

Police said the woman earned a total of 1.3 million won for providing the video clips, which had images of some 200 victims.

The police identified the suspect after one of the video clips that spread online showed her image reflected in the mirror. Authorities then confirmed that she was at the scene at the time based on her payment and call logs.

Police began their search Tuesday after identifying the suspect. Choi, who previously lived in Seoul, went to her hometown in Gokseong County, South Jeolla, after authorities started their investigation.

Police said she formerly worked in the entertainment industry and currently does not have a job.

According to police, Choi has confessed to the offense, saying that a man she was acquainted with via a social networking service requested she record the events inside the dressing rooms.

The man is believed to have bought the camera, made in Taiwan, which looks like a cellphone bumper case, specifically for that purpose.

Choi stated that she did not have any of his personal information, police said. Investigators are currently looking into the messaging platform the two used to find the man.

Choi was arrested after reporting to police around 9 p.m. Tuesday, that she had been assaulted by her father. The two reportedly fought over the recorded video clips as well as debts she owed her relatives.