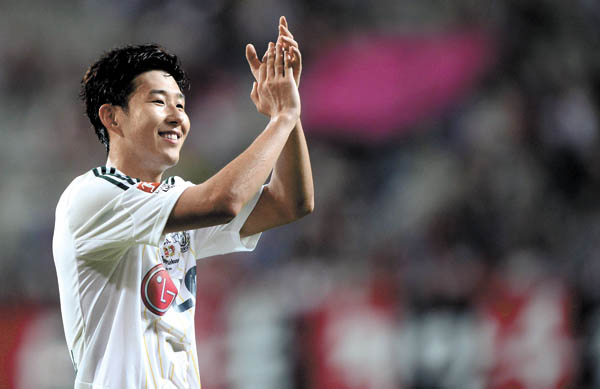 Korea national team forward Son Heung-min is set to join Tottenham Hotspur from Bayer Leverkusen, which will make him the 13th Korean footballer to play in the English Premier League (EPL) and the most expensive Asian player in the world.

As he headed for a medical test in London, German and English media on Thursday said Son is on the verge of signing with Tottenham.

English media is reporting a transfer fee of up to 21.9 million pounds ($33.9 million) for his move from the Bundesliga.

Leverkusen sporting director Rudi Voller admitted negotiations are ongoing. He told German TV, “I saw many medicals in this business where there was no deal afterwards. We will try to reach an agreement, but only under our conditions.’’

Son, a former FC Seoul youth player, has been one of Leverkusen’s promising stars after he joined the team from Hamburger SV in 2013 for a reported fee of 10 million euros ($11 million). The forward, who can play in center as well as on the flanks, has played in 62 Bundesliga games for Leverkusen and netted 21 goals. He also has five goals in 19 Champions League games for Leverkusen.

Speculation about Son’s move heightened after he missed the league action against Hanover last Saturday and did not participate in the team meeting on Wednesday before Leverkusen’s 3-0 victory over Lazio in their UEFA Champions League qualifying second leg at home. He was not even included in the match day squad.

Son’s teammate Hakan Calhanoglu told Sport1 in Germany that he tried to reach the Korean international but failed to talk with him. “The whole team is pretty disappointed, but it’s not his fault,” Calhanoglu said. “I think he is ill-advised.”

Son, who scored 17 goals last season, became a target signing for the London team, as Spurs is trying to boost its attack alongside striker Harry Kane, who netted 21 goals in 34 matches to become second best scorer in the EPL last season.

According to English media reports, the London-based club has been tapping West Bromwich Albion striker Saido Berahino, but since the negotiation is struggling, the team’s focus has switched to Son.

If Son moves to Tottenham for 30 million euros, he would be the most expensive Asian player, breaking the record previously set by retired Japanese player Hidetoshi Nakata. The midfielder in 2001 moved to Italian side Parma from Roma for a reported fee of 25 million euros.

The transfer fee of 30 million euros will also be a club record for Leverkusen, beating the 21 million euros it received from Chelsea in 2013 for the German Andre Schurrle.

If Son signs, he will be the 13th Korean to play in the EPL after former Manchester United midfielder Park Ji-sung paved the way for Koreans. There are currently two Koreans in the EPL: Swansea City’s Ki Sung-yueng and Crystal Palace’s Lee Chung-yong.

Son, a Gangwon native, can also be the second Korean to play for Tottenham after Lee Young-pyo. The left back moved from PSV Eindhoven in 2005 and played until 2008.