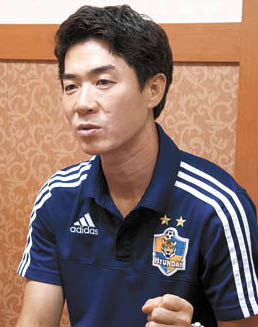 Ulsan Hyundai coach Yoon Jung-hwan speaks about his team’s performance in the K-League Classic at a restaurant in Ulsan last Thursday. [Ilgan Sports]

Yoon joined the K-League Classic club in December with a two-year deal and a one-year option. The 42-year-old was in the spotlight when he signed with Ulsan because of his achievements in Japan.

In the J-League, Yoon led Sagan Tosu to the first division for the first time in the club’s history and led the team to the top of the league in the middle of 2014. However, after his contract was suspiciously terminated by the club last summer, he returned to his homeland looking to revive his career.

It is not going well.

Ulsan is currently 10th among 12 clubs in the K-League Classic, with five wins, 11 draws and 11 losses. For a two-time K-League champion, hovering just above the relegation zone is not acceptable.

The team has not collected a victory in its last six matches but will aim to break its streak against Gwangju FC on Saturday.

Yoon was star midfielder on the Korean national team from the mid-1990s, appearing in the 1996 Atlanta Olympics as well as the 2002 FIFA World Cup, where Korea reached the semifinals. He retired from playing in 2007.

But his reputation as a player and his record in Japan can only take him so far, and home fans are beginning to question whether he actually has the ability to lead the team.

Ilgan Sports, an affiliate of the Korea JoongAng Daily, sat down with Yoon last Thursday to answer some of the questions his critics are asking.

Q. Why haven’t you developed a unique coaching style?

A. This is my first time as a coach in the K-League, so there are many difficult things. I’m trying to make my own style in the league, but it’s not easy to do it from the beginning. Jeonbuk Hyundai Motors’ Choi Kang-hee created his attack-focused style after a long season. I’m in the process of making my own kind of football, which is defense made for offense. In order to attack, you have to have the ball in your possession. And to have the ball, you have to defend. The area from which you take the ball from your opponent and start attacking is important. I’m sharing this idea with players. I’m not playing defense-only football.

Why aren’t you able to produce results in a short period of time?

I can understand people criticizing me for that, but it’s not easy to make achievements in little time. When I came to the K-League, I had nothing around me. I need more time. With Sagan Tosu, I invested a long time.

Why haven’t you been using Kim Shin-wook effectively?

That’s not true. I first saw him after I came to Ulsan, and I don’t have any prejudice against him. I talk to him a lot, and he works hard. I also want to take advantage of his strengths.

Do you know enough about the K-League?

Why don’t you seem to care about relegation?

Why don’t you have football friends in Korea?

I don’t know where this criticism comes from. I have played in the K-League before and had good relationships with players on the national team. Many veteran players loved me and helped me when I was in trouble. In the K-League, I’m close with Suwon Samsung Bluewings coach Seo Jung-won.

Is Ulsan’s current standing because of its current squad?

I can understand why fans are asking that. It’s a reasonable response. We have good players. Although football doesn’t correlate with players’ name value, I will try to utilize this squad as much as I can. Once we find the rhythm, we can go to the top.

Do you know you’re being compared to Ulsan’s former coaches?

I know I’m compared to Kim Ho-kon and Cho Min-koo by fans. But I don’t think about that right now. There’s no time to think about comparisons. I just do my job. They are former coaches, and I’m the current coach. I should overcome this moment. Good days are coming.

Have you heard the rumors that you’ll be fired soon?

Do you think you can advance to the top group in the split system?

I’m trying to get Ulsan included in the top group. I know that I’m not meeting fans’ expectations, but it will be better in the future. I’m looking for us to be in the top group and win the FA Cup. I will show a different Ulsan in the near future.