Destroying historical sites not a new tactic for fanatics

Destroying historical sites not a new tactic for fanatics 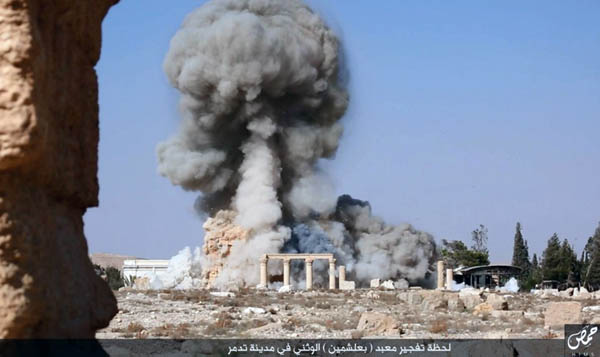 This undated file photo released on Tuesday on a social media site used by Islamic State militants, which has been verified and is consistent with other AP reporting, shows smoke from the detonation of the 2,000-year-old temple of Baalshamin in Syria’s ancient caravan city of Palmyra. [AP/NEWSIS]

CAIRO - A nearly 2,000-year-old temple in the Syrian city of Palmyra this week was the latest victim in the Islamic State group’s campaign of destruction of historic sites across the territory it controls in Iraq and Syria.

The group has destroyed ancient buildings and artifacts, as well as shrines to Shiite and Sunni Muslim saints - looting some sites for profit - all in the name of purging what it considers symbols of idolatry to create a society dedicated solely to its extreme and violent interpretation of Islam. The ISIS campaign has horrified many around the world with a scope of destruction not seen in decades.

Throughout the centuries, invaders, religious fanatics and colonizers have targeted works of art, houses of worship and other pieces of heritage. The goal is often to uproot, eliminate, replace or impose control over the culture and heritage of their opponents. Nearly every ethnic or religious conflict across history has seen at least some cultural destruction, along with genocides like the Nazi Holocaust against the Jews. Below are some examples:

During the Reformation in 16th century Europe, Protestant preachers railed in sermons against Catholic statues of saints and other religious relics as forms of idolatry. Mobs of Protestants attacked hundreds of Catholic churches, particularly in France, Germany and the Netherlands, destroying statues and images - and in England under King Henry VIII, churches were stripped of their relics and riches. The result erased from Europe’s cultural landscape untold numbers of works of art.

Roman armies destroyed the Jewish Temple in Jerusalem in 70 A.D. after a revolt against Roman rule. The temple, built 500 years earlier to replace the first temple destroyed by the Babylonians, was the heart of Judaism. The first temple had held the Ark of the Covenant, which vanished after the Babylonian conquest. All that remains of the second temple is its Western Wall, which is today the holiest site in Judaism, located at the base of Jerusalem’s Temple Mount.

Spanish conquistador Hernan Cortes conquered the Aztec capital, Tenochtitlan, in 1521, bringing to an end the empire that ruled over much of what is now Mexico. To root out the local religion, Cortes ordered temples destroyed, including the Templo Mayor, the giant step pyramid at the center of Aztec spiritual culture - and site of their human sacrifices. The temple was leveled, and a Catholic church built on its remains. Parts of the temple were uncovered in the 1970s during the digging of a metro in Mexico City.

From the 15th to 17th centuries, Benin - in modern-day Nigeria - was one of the grandest capitals in Africa. In the late 19th century, negotiations with the British trying to dominate the area and its trade turned bloody, with Benin’s troops killing a British expeditionary force. In retaliation, British troops captured the city and burned it to the ground, destroying its palaces and religious sites. They also carted off some 2,500 works of art, including bronze and ivory sculptures and plaques and the palace’s carved wooden gate.

During the Second Opium War, waged by Britain and France against China to force it to open up markets and legalize the opium trade, British troops in 1860 destroyed the sprawling Old Summer Palace in retaliation after the Chinese tortured and executed members of a British diplomatic mission. Built some 100 years earlier, the palace was a sprawling complex of palaces, pavilions and gardens filled with works of art. After orders came from Britain’s High Commissioner in China, Lord Elgin - notorious for his looting of marbles from Greece’s Parthenon - it took 3,500 troops three days to burn down and tear apart the palace.

Hindu extremists tore down the 16th-century Babri Mosque in northern India in 1992, sparking riots across the country that left at least 2,000 people dead. Hindu groups claim the mosque was built after a temple dedicated to the Hindu god King Rama was destroyed by Muslim invaders, though that claim is disputed by some historians. Still, it’s undisputed that over the centuries, Muslim invaders of South Asia did destroy Hindu holy sites. For example, the Somnath Temple in western India was destroyed multiple times by Muslim rulers, the first time in the 11th century.

For decades in the 20th century, Islamic militant groups, including Al Qaeda, put little emphasis on destroying shrines or historical sites. But the Taliban brought back the tactic in dramatic fashion in 2001 when they blew up the two towering 1,500-year-old statues of Buddha carved into a mountain in the Afghan region of Bamiyan, stunning the world.

Since then, the tactic has gained prominence among Islamic extremists as a way to tout their claim to “purify’’ society and create their vision of an Islamic state.

In Mali, Islamic radicals in 2012 overran Timbuktu, the historic city of Islamic culture. The militants destroyed 14 of the city’s 16 tombs of prominent figures and thinkers and also targeted the library of camel-skin-bound manuscripts dating back to the 13th century.