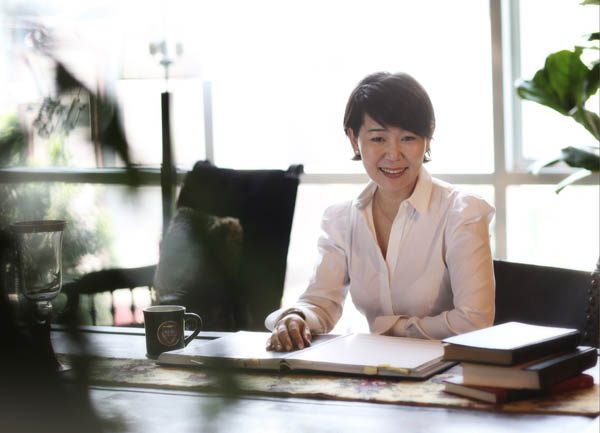 Jiyoon Lee, managing director of the National Museum of Modern and Contemporary Art, Seoul. Provided by the museum

Although the National Museum of Modern and Contemporary Art (MMCA) has suffered criticism about the prolonged lack of a leader and sinking attendance after the outbreak of Middle East respiratory syndrome, its Seoul branch is steadily attracting visitors with diverse exhibitions and events. The number of visitors even increased 23 percent from a year ago to about 452,000 in the first half.

“We expect attendance numbers through this year to be higher than last year, despite the unfavorable conditions in the first half,” Jiyoon Lee, 46, managing director of the MMCA Seoul, told the Korea JoongAng Daily last week.

Before Lee took the position in May 2014, she had been active as an independent curator mainly based in London. She earned a doctoral degree in art history at the Courtauld Institute of Art, University of London.

With experience studying and working in London, Lee plans to help the MMCA Seoul become more audience-friendly while fulfilling its “basic roles.”

Q. Although seven exhibitions are going on here, some visitors say they get the impression the museum still has empty spaces. What do you think?

A. It might be because of the characteristics of the museum’s architecture - an open museum in the style of an archipelago. And when there are many medium-scale exhibitions running together, the audience can see each one with ease relatively quickly and then feel empty spaces between them. That’s not bad, but I also plan to hold more large-scale exhibitions for longer terms. Beginning in 2017, we will hold one-year exhibitions of contemporary art pieces from our collection.

The free admission event during the extended weekend around Liberation Day (Aug. 15) seems to have attracted many visitors. Did it?

Yes, for the single day of Aug. 15, more than 16,000 visitors came - the highest daily number since opening day. As another attempt to increase the accessibility of the museum, we have been operating the Museum Exhibition Guide program since early this year. A docent does a briefing about all the ongoing exhibitions every other hour, not only in Korean but also in English for foreign visitors, who account for 30 percent of our audience. You know, the strength of U.K. museums is their easy accessibility.

What are other strengths of U.K. museums?

Their vast collections. A museum’s collection defines the museum, and a museum’s basic role is to establish its collection, to study and newly interpret them and to make exhibitions based on the research results.

It seems that international awareness of Korean contemporary art grew rapidly in the early and mid-2000s but has been sluggish in recent years. What do you think?

In reality, the status of a country’s art cannot be separated from its economic power. Korea has bred artists of more international importance over the last 20 years thanks to its economic growth. Korea hadn’t had an art market in earnest until the early 1990s.

Although the 2008 global financial crisis hit the local art market hard, it has also given an opportunity because it changed the dynamics of the global art market, increasing the weight of the Chinese market and Asian contemporary art.

Then the art market has importance to museums? Some people think art markets and art institutions are two separate worlds.

Of course, there are artists popular only in markets, whereas there are artists whose works are difficult to trade in markets but open new chapters in art history. One example is the founder of video art, Nam June Paik. Museums should support the latter. Still, when art markets are solid and diversified, museums gain ground. Museums should recognize the importance of art markets.

What was your most memorable curating project? And is there any special project you want to try in the future as a curator?

Among the past projects, I’d like to pick the 2005 exhibition “Seoul: Until Now!” at the Kunsthal Charlottenborg art museum in Copenhagen. Many of the young Korean artists introduced to the Danish capital through the exhibition, such as Osang Gwon, Yeondoo Jung and Kyungah Ham, have grown into important artists now.

At that time, there was a strong need in Europe for Asian contemporary art from the Asian perspective. That show met the need.

And someday, I’d like to make interdisciplinary exhibitions that link contemporary art and what I consider to be art among the works commonly categorized outside fine art, such as those by traditional craftsmen and performers. With such exhibitions, I want to study the true identity of Korean art in depth.