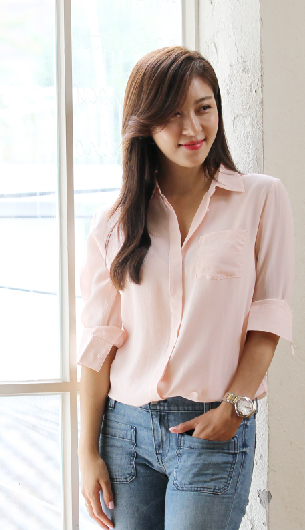 Some say actress Ha Ji-won’s “magic” may have run out.

With a brief absence of the director and changing of the main writer in the middle of shooting, the 16-episode drama series only managed to record ratings of 6 to 7 percent.

Nonetheless, the 37-year-old actress, who had to portray her character, Oh Ha-na, in her teenage years, worked hard to stay fit by learning ballet.

Q. What are your thoughts on the disappointing ratings?

A. I think it’s ironic, actually. Everyone I met told me that the drama is so much fun. In the case of “Empress Ki,” for instance, I rarely got those kinds of responses from people. But I didn’t really let myself get discouraged over the ratings. After all, people watch broadcast content not just through TV these days.

You had to pull off Ha-na from her teenage years to her 30s. What was that like?

The director didn’t want to use a young actress to portray Ha-na in her teens. In fact, I didn’t know that Ha-na in her teens would take up such a large portion of the drama. So in a way, it was burdensome. But in the end, I think it was sort of like time travel for me.

And the drama ended with a happy ending, where love wins.

Before doing this piece, I didn’t believe in the concept of “guy friend” or “just a friend.” But now I do. I really want a guy friend like Choi Won (played by Lee Jin-wook) for myself. It’s amazing how he can be such an amazing friend while at the same time an awesome boyfriend.

Your fashion in the drama was quite notable.

We actually put a lot of effort into the fashion, especially since for “Empress Ki” [which was a historical drama], I rarely got a chance to show that side of me. There were times when I had to wear more than 15 outfits in just one day. I also used two bags when playing Ha-na in her 30s, because I noticed how professional women nowadays carry one bag for their laptop and a mini bag.

I heard there were times when shooting would go on well into the night. How did you stay fit?

Usually, three months before I begin shooting a piece, I start training like an athlete. Except for this drama, because I had to play a teenage girl [for part of the time], I quit muscle training for six months. Instead, I focused on ballet and stretching. That’s why although my weight remains the same, my muscle mass decreased quite a lot.

Most people think of you as an actress best suited for the action genre.

I like action. But I chose “The Time We Were Not in Love” because I felt like I’ve only shown that tough, action girl side of me until now. In real life, though, I’m not that tough. That’s actually why I think I like action, because at least in [films and dramas], I can be the tough girl.