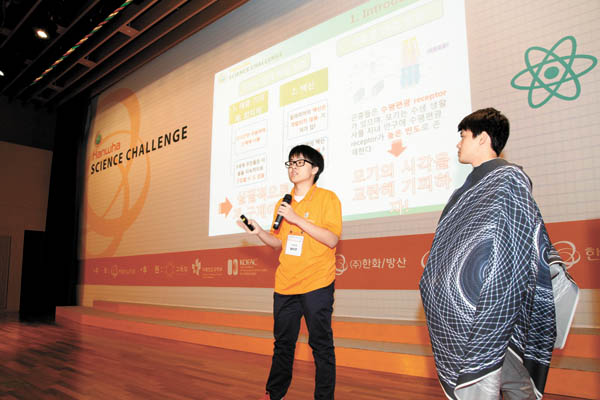 A participating team in Hanwha’s Science Challenge gives a presentation Thursday at the conglomerate’s 63 Building in Yeouido, Seoul. Provided by the company

Launched in 2011, the “Science Challenge,” held at the company’s 63 Building in Yeouido, western Seoul, is a competition for high school students to conduct research and experiment on issues like energy, bio-technology and climate change.

Under the theme “Saving the Earth,” this year’s event attracted 914 students across 457 teams.

Hanwha Group has selected a shortlist of 30 teams who will demonstrate their findings at the event, which ends today.

Awards will be handed out based on the novelty of the subject chosen and whether a team sought to shift current practices.

Some 240 judges, consisting of teachers, professors and researchers at Hanwha, reviewed the projects.

The Science Challenge has the largest rewards among the country’s science competitions for teenagers.

The first place team will receive a scholarship worth 40 million won ($33,960), while second place winners will be awarded 20 million won. Hanwha will select two teams for third place, who will each receive 10 million won.

All 30 of the shortlisted teams are entitled to a 1 million won prize for research funding.

Winners will also receive extra credit when applying for internships at Hanwha affiliates.

“I hope the participants will become great scientists who can contribute to the happiness of mankind through this experience at the Science Challenge competition,” said Kim Chang-bum, the CEO of Hanwha Chemical.