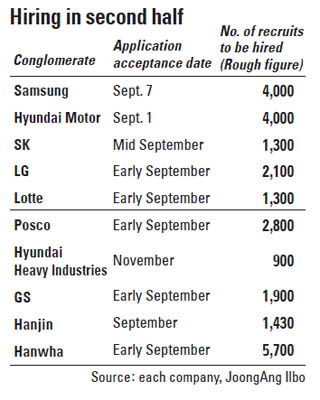 Hyundai Motor Group announced Thursday that it will hire 36,000 entry-level workers from next year through 2018 as part of its corporate social responsibility program to help ease joblessness among young people.

The average of 12,000 new hires per year marks an increase of 32 percent from last year’s 9,100 and 26 percent from the 9,500 planned for this year. The biggest automaking conglomerate in Korea, which runs both Hyundai Motor and Kia Motors, has earmarked 120 billion won ($102 million) for the three-year plan.

The group will also start an internship program for university students that will extend to its overseas operations. It will recruit 1,700 interns in Korea with outstanding foreign language skills through 2018 and give them work at its affiliates operating in foreign countries. Those opportunities could lead to jobs at the group later.

The decision comes a month after President Park Geun-hye, whose five-year term ends in February 2018, said in the presence of 17 heads of major Korean conglomerates at the Blue House that she hopes to see those companies expand positions for young people and help boost the sagging economy. 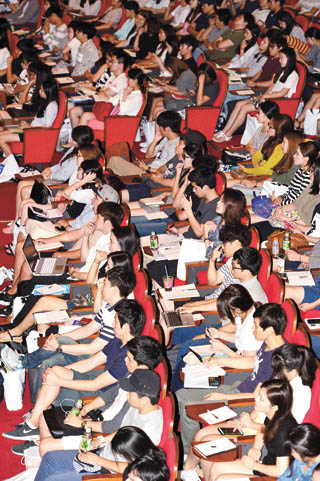 Job seekers listen to a lecture on hiring trends provided by a recruiting magazine in an auditorium at Sejong University in Gwangjin District, Seoul on Thursday. [NEWSIS]

“The new employment plan is a testament to our solid readiness to step up to social responsibility with a long-term perspective,” said a Hyundai spokesman.

In June, the country’s youth unemployment rate stood at 10.2 percent, the highest level since 1999, when Korea was recovering from the 1997-98 Asian financial turmoil. The rate edged down to 9.4 percent in July, according to Statistics Korea, but that is 2.5 times the regular unemployment rate of 3.7 percent.

Hyundai also announced Thursday it would pick some 4,000 entry-level workers for its 11 affiliates in the second half. Applications will be accepted starting Sept. 1, and all applicants who pass the initial documentation-based screening will be offered a written test on Oct.9 that gauges their work-related knowledge, personality and aptitude.

Each year, tens of thousands of hopefuls from across the country are tested. Those who pass the test go through several rounds of interviews, including one conducted in English.

Last year, the top automaker scrapped 13 items it used to ask of applicants, including the occupation of their siblings, experiences living abroad and personal photographs. Those kinds of personal qualifications are now considered irrelevant in the hiring process, the company explained.

The group will introduce a new recruiting system starting in the second half, after overhauling its 20-year-old system. The old system had three steps after paper screening - a written test, work-related interview and final interview with executives. Requirements for the paper screening included a GPA of over 3.0 on a 4.5 scale and certain scores in officially recognized English tests, such as the TOEIC, depending on the nature of the affiliate.

The new system will have five stages. The prerequisites to take Samsung’s self-developed written test, widely known as the GSAT, have been boosted. Job seekers must first pass a work suitability test to be eligible for the GSAT. One more stage of interviews has been added to gauge applicants’ “creativity.”

LG Group, the country’s fourth-largest conglomerate, will hold a written exam on Oct. 10, with plans to make 2,100 hires, a similar number to a year ago. SK, the third-largest conglomerate, has yet to confirm its timeline for second-half recruiting, but it is expected to pick some 1,300 new hires.