BIFF gearing up for 20th edition

BIFF gearing up for 20th edition 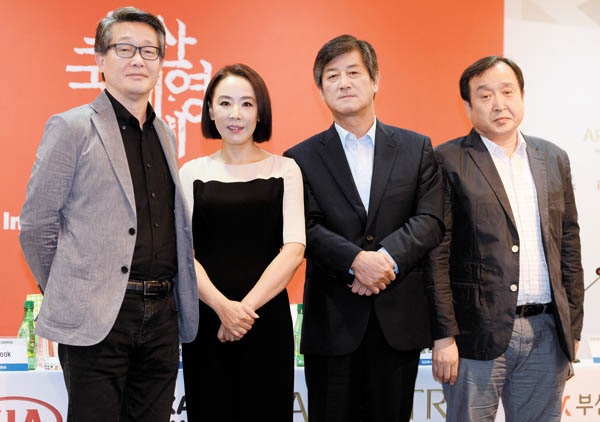 From left, Kim Ji-seok, the executive programmer of BIFF, Kang Soo-youn and Lee Yong-kwan, festival co-directors, and Jay Jeon, director of the Asian Film Market, pose at a press conference on Tuesday for the festival’s upcoming 20th edition at the Koreana Hotel in central Seoul. [NEWSIS]

Despite a number of setbacks including budget cutbacks and management changes due to a conflict with the host city, Asia’s largest film festival is nevertheless set to screen a vast number of quality Asian films while supporting rising filmmakers.

The conflict emerged last year when the festival forewent with screening a politically charged documentary despite Busan’s protests.

This year’s event will introduce 304 films from 75 countries, of which 121 of them are having either their world or international premieres.

“We didn’t want to come up with extra events to greet our 20th birthday,” said Lee Yong-kwan, the festival’s longtime co-director, at a press conference on Tuesday. “I have always said, even before the conflict occurred, that I want to operate the 20th edition in a mature way, instead of focusing on just presenting it nicely.”

The festival has selected for its opener the Indian film “Zubann,” the directorial debut of Mozez Singh. Although it’s rare for a debut feature to be chosen as such a big event’s opening film, the festival has confidence in its producer, Guneet Monga.

Monga is a renowned film producer based in India, best represented by works like “Gangs of Wasseypur” (2012) and “The Lunchbox” (2013).

“It is not easy to select the work of a new director as the opening film,” said the festival’s executive programmer, Kim Ji-seok.

“But we had confidence in its producer. I believe that the film will have a healing effect on the audience. To those who feel like they need to look back on their lives, this film will make you do that: to think about your life and where it is headed,” he added.

“Zubaan” follows the coming-of-age story of Dilsher, a young boy raised in a poor family who heads to the city to find success. However, on the verge of achieving what he wished for, he agonizes over the true value of his life.

A Chinese film will close the event. Directed by Larry Yang, the melodrama “Mountain Cry” is adapted from Ge Shui-ping’s eponymous award-winning novel.

With a remote Chinese village as its backdrop, the film kicks off with the sudden death of village newcomer La Hong after accidently stepping on an explosive installed by Han Chong for hunting purposes. Instead of reporting it to the police, the villagers decide to stay silent if Han Chong agrees to take care of the bereaved wife, Hong Xia. The two secretly fall in love, but the story takes a new turn when village secrets begin to emerge.

Another notable event at this year’s BIFF is the “Korean Cinema Retrospective.”

The 1960s were the so-called golden era for Korean cinema, with an average of 200 films being made annually while people saw about four or five films every year. However, only a few of these films are remembered today as having contributed to Korea’s film industry. Titled “Hidden Masterpieces of the 1960s,” the section will be dedicated to introducing the works of eight forgotten directors of the era.

Park Sang-ho’s “DMZ,” Lee Hyung-pyo’s “When Night Falls at Myeong-dong” and Lee Sang-eon’s “The Cash Is Mine” are some of the works included in the section.

Overcoming the existing framework of the global film industry, which is tilted toward the West, the section will map out what Asian films have achieved so far. A top-100 list has been selected by 73 film specialists ranging from directors to critics and journalists, which includes both well-known pieces and more obscure films. Out of the 100 films, the top 10 will be screened during the festival.

Another special program will be devoted to French films. Under the title “My French Cinema,” the section will introduce 10 French films including a remastered version of Jacques Demy’s “A Room in Town” and Calude Lelouch’s “A Man and a Woman.”

Aside from the film screenings, another must-visit event of BIFF is the Asian Film Market, which will provide various opportunities for the sale, promotion and exhibition of various film content from Asia.

And this year’s market will also include for the first time the E-IP Market, where intellectual property ready to be adapted into motion pictures will take center stage. The latest addition reflects the trend in which a single source of stories gets adapted for various platforms. As the first of its kind in the world, the market will include forums, seminars and pitching events.

“In a society where mobile has become an inseparable part of people’s lives, we are opening this market where any type of intellectual property, whether for use in a webtoon, web novel, web drama or other, can be sold and bought,” said Jeon Yang-jun, also called Jay Jeon, the Asian Film Market director.

“It is still a league of only Korea and China. And I think this market shouldn’t be either too big or too small. If the IP market settles in, I believe it can be another source of Hallyu [Korean Wave],” he added.

The film festival may not include special celebratory events for its 20th edition, but it is fully loaded with substantial events to satisfy the appetites of many movie fans from around the world and those looking for an exciting time.