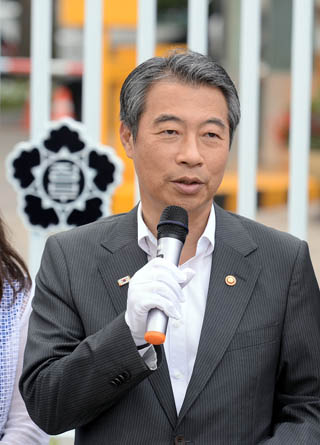 The home affairs minister and finance minister within the Park Geun-hye administration are set to be investigated by the National Election Commission (NEC) for controversial remarks they made wishing the ruling party victory in the next general election.

The opposition New Politics Alliance for Democracy (NPAD) on Thursday filed a complaint to the NEC requesting an investigation into Minister of Government Administration and Home Affairs Chong Jong-sup on charges that he violated his duty in maintaining political neutrality as a public servant.

The NPAD also asked the election watchdog to investigate Choi Kyung-hwan, the deputy prime minister for the economy and the minister of strategy and finance, for remarks he made stating that he would assist the ruling party in the general elections by accomplishing the government’s goal of economic growth. The next general election will take place in April 2016.

Minister Chong reportedly made those comments Tuesday during a dinner meeting with Saenuri Party lawmakers, where he proposed a toast, prompting representatives to repeat “wish for victory,” as he finished with, “general elections,” according to multiple participants. The main opposition called Chong’s action outrageous, as the minister of government administration and home affairs is responsible for overseeing a free and fair election and preventing public servants from intervening in the polls.

The NPAD demanded President Park fire Chong for his remarks, adding that the government’s devotion to a fair election would be questioned if the minister remained in his post.

The opposition also criticized Deputy Prime Minister Choi over comments he made during the dinner.

“We were told that Choi stated he would improve the economic growth rate to 3 percent next year so that it would help [the ruling party] in the general elections,” Rep. Yoo Eun-hae, an NPAD spokeswoman, said on Wednesday. “We will take action against him as well.”

Opposition floor leader Rep. Lee Jong-kul pressured the president to sack both ministers and said on Thursday that the party would start reviewing legal steps to oust them, including drawing up a resolution recommending dismissal, impeachment and a complaint with the prosecution.