On the hunt for authentic tastes in Seoul

On the hunt for authentic tastes in Seoul 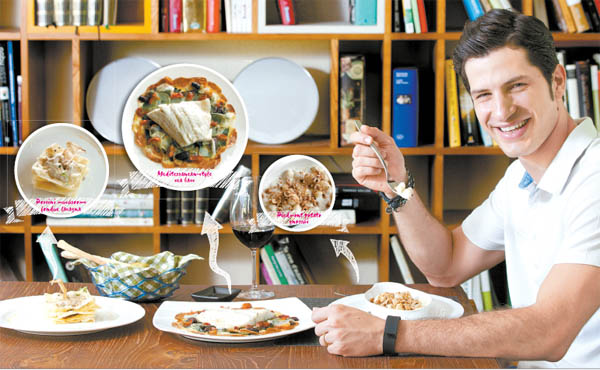 It is common to experience a sense of disappointment after dining at a Korean restaurant abroad. Even though the sign outside advertises Korean food, the taste and appearance of the dishes rarely live up to expectations. The kimchi is too mushy, and an unidentified red sauce is being passed off as gochujang (hot pepper paste).

Such experiences lead many Koreans to wonder how foreigners living in Korea feel about the restaurants here that allegedly sell their home countries’ dishes. Over the past few years, a vast number of restaurants serving foreign cuisine have sprung up. However, instead of traditional dishes, most of these eateries serve dishes that have been adapted to suit Korean tastes.

Before these foreign foods arrived on the Korean Peninsula, they were prepared according to traditional recipes and methods dating back hundreds of years.

To reveal the traditional flavors of various foreign dishes, three stars of JTBC’s reality program “Non-Summit” were invited to recommend restaurants in Seoul that serve the foods of their home countries in their original forms. 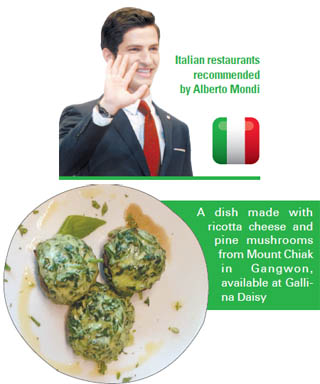 “When I first arrived in Korea eight years ago, there were hardly any Italian restaurants that properly served Italian food. However, as the number of students studying cooking abroad has skyrocketed and the imported ingredients have been diversified in recent years, there seem to appear a multitude of restaurants that serve the real Italian food,” he said.

“Even though there are many Italian restaurants in Korea that sell pizza and spaghetti together, that is actually not the norm in Italy. In fact, selling pizza and spaghetti at one place is just like serving rice and tteokbokki [rice cakes in red chili sauce] at the same eatery.”

Mondi recommended nine restaurants located in Seoul that offer traditional-style Italian cuisine. Seven of the nine (Nos. 1 to 7) are run by Italian chefs, while the remaining two restaurants are operated by Korean chefs.

BottegaLo is a popular Italian restaurant that is particularly well known for its home-style recipes. Its oven-baked Milano-style pizza and lasagna are a few of the most frequently ordered menu items.

The Napoli-style pizza served at this restaurant are made with tomatoes and mozzarella cheese and giant in size, up to one meter (three feet) in length. Baked in a wood-fired oven, the outer crust is crispy while the inside is soft and chewy.

Gnocchi mare e monti, made using Jeju Island potatoes, shrimp cooked in white wine and porcini mushrooms, is one of the most popular dishes at this restaurant. The handmade pasta is similar to Korean sujebi, or hand-made flour dumplings, but smaller and rounder. With a soft texture, the rich pasta melts in your mouth.

Not only does this restaurant specialize in foreign food, but also the waiters come from diverse backgrounds. And the top-ranked menu item is melanzane alla parmigiana, which is a baked dish with layers of eggplant topped with tomato sauce, mozzarella, parmesan cheese and basil. All dishes are served with bread.


5. Peninsula, located inside the Lotte Hotel in Sogong-dong, central Seoul

Peninsula was awarded in 2013 the Ospitalita Italiana, which is only given to restaurants that serve traditional Italian cuisine. The restaurant became widely known after its chef served Pope Francis a banquet when he visited Korea in 2014.

After moving from Seorae Village in Seocho District, southern Seoul, the restaurant boosted its Italian ambiance by painting its outer wall in yellow. The restaurant is unique in that all of its pasta noodles are pulled by hand. A dessert trolley bears eight to 12 different desserts, another reason that Paolo is highly loved by customers.

The homemade lasagna that is cooked sous-vide, a cooking method in which food is sealed in a plastic bag and then placed in hot water, is a masterpiece. The combination of beef sirloin with handmade lasagna noodles creates a perfect texture. However, those people who wish to hear an explanation of the food they eat may feel inconvenienced, since the waiters don’t seem to have a proper understanding of the food they serve. That is unfortunate, since the price of the food is comparatively high.

“Every time I come here, I always joke and ask the chef whether she is hiding an Italian,” Mondi said. Gallina Daisy was opened by chef Daisy Park, who worked with Santino Sortino, the No.1 Italian chef in Korea. One of the main characteristics of this restaurant is that the chef creates the taste of traditional Italian food using only Korean ingredients. The restaurant was originally a Korean traditional house but has been remodeled, creating a modern and cozy atmosphere.

Thanks to the open kitchen at this restaurant, customers can watch the food being cooked. A unique characteristic of the restaurant is that it doesn’t overuse ingredients, using only a limited amount of toppings to highlight the original taste of pasta. Even though the amount may be less than expected, that’s what seems to make the food more delicious.

After introducing the nine restaurants that he believes serve real original Italian food, Mondi added that “not every Korean-style Italian food is bad. Sweet pumpkin pasta and salmon pasta, for instance, are fusion dishes. But I think they are creative and also have excellent tastes.”

However, the TV star explained that it may be better if people first have a better understanding of the real tastes of traditional food. Gorgonzola pizza, for example, is usually enjoyed with honey by Korean people. In Italy, however, the bitter taste lent by the “blue mold cheese” is what makes gorgonzola pizza a popular dish.

Furthermore, while it is the norm for Korean people to eat pizza with a side of pickles, that isn’t the case in Italy.

“If you visit a real Italian restaurant and ask for [pickles], there are quite a few eateries that won’t have it.”

Bread, salad and soup are a few of the representative foods of Germany that come in different styles depending on the region.

“Since Germany was traditionally an agrarian society, Germans tend to simply eat bread for breakfast and dinner,” explained Daniel Lindemann.

For this reason the German TV personality introduced a few places in Seoul where visitors can experience the authentic taste of German bread. 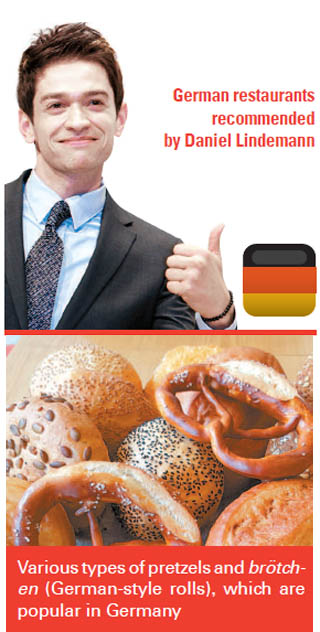 1. Ach So in Hannam-dong, central Seoul

Ach So sells real German-style brotchen, which are German-style rolls made of rye and various other grains. Since they don’t contain any sugar or oil, the taste is very light, crunchy on the outside and soft inside. One recommended menu item is the brotchen sandwich with pumpkin seeds. The combination of ham, cheese and pumpkin seeds create a perfect taste. In fact, the name Ach So is a German expression that means “Oh, that’s right.”

At this bakery, a German chef sells not only German-style bread but also various German dishes such as roasted sausage and jaeger schnitzel which is a crispy breaded veal cutlet served with mushroom cream sauce. Schnitzel is a German-style tonkatsu, or fried pork cutlet.

Greece has become a hot destination after tvN’s travel reality program “Grandpas Over Flowers” aired a series featuring Greece last May. “Non-Summit” star Andreas Varsakopoulos from Greece knows where to get authentic Greek food in Seoul.

Varsakopoulos recommends this restaurant because it serves traditional Greek food. “I didn’t expect much before I went there. But I was taken aback after tasting the food because it was so delicious,” he said.

The restaurant first opened in 2004. It also launched its second branch four years ago. 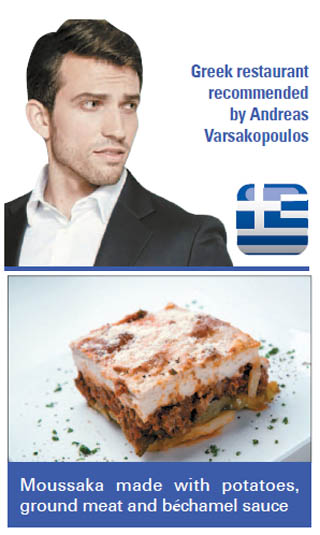 The main ingredients in Greek food are olive oil and feta cheese made from sheep milk. Moussaka, a common dish in Greece, is made from eggplant or potato, ground meat and bechamel sauce, made with butter, flour and milk.

Saganaki, another popular dish, is made with shrimp, various vegetables and tomato sauce, along with the core ingredient of feta cheese.

“Since Greek food tastes a little heavy, it may seem a little too greasy for Korean people,” the TV personality said.

“If eaten together with tzatziki [yogurt sauce], which is often perceived as Greece’s kimchi, Greek food will become more enjoyable.”

Greek food is not easy to find in Korea. According to Santorini CEO Choi Eun-kyung, “Greek cuisine may seem unfamiliar to many Korean people. But what also counts is that it’s difficult to secure an excellent [Greek] chef.”

One reason behind the difficulty is that from the perspective of Greek people, who love enjoying Mediterranean-style relaxation, Korea’s hectic working environment isn’t attractive. To make it worse, Greek ingredients are imported here at comparatively high prices.

“Even though Turkish ingredients may be similar to Greek, they can’t exactly generate the taste of unique Greek food,” Choi explained.

“And one of the reasons that the restaurant has maintained its popularity for such a long time is that instead of suiting the tastes of Korean people, Santorini aims to maintain the taste of original Greek cuisine.”