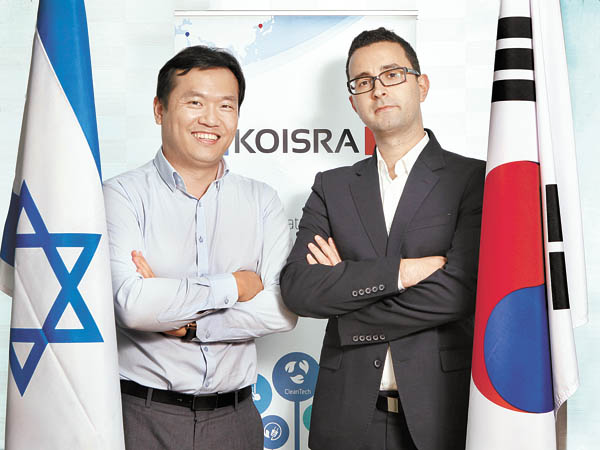 While many Korean start-ups seek to emulate the success of tech entrepreneurs in Silicon Valley, Park Dae-jin (David) encourages them to look to Israel instead.

Park, CEO and managing partner of start-up accelerator Koisra Seed Partners (KSP), says Korea and Israel are in similar positions due to their modest territory size, limited natural resources and advanced technology infrastructure backed by a strong high-tech sector, while the market and geographical conditions in Korea and the United States are vastly different.

“When asked which company they are looking to aim at, most of local start-ups mention successful tech companies having their roots in the U.S., more precisely in Silicon Valley,” Park said.

“The U.S. itself is a single large market. So, the size of investment and business environments doesn’t necessarily fit for Korean start-ups.

Despite the constraints, Israeli tech start-ups are shining in the global tech landscape.

Israel saw a record year of acquisitions and initial public offerings (IPOs) from the country’s start-ups in 2014, according to reports by accounting firm PricewaterhouseCoopers (PwC) and Ethosia Human Resources.

The reports show that 52 Israeli start-ups exited to the tune of approximately $15 billion last year, while 18 IPOs brought in $9.8 billion.

On the other hand, the performance of Korean start-ups is a mixed bag.

In terms of quantity, Korea has recently witnessed a dramatic rise in the number of small- and medium-sized companies against the backdrop of the booming tech industry and the support of the government that emphasizes technology-based entrepreneurship via its “Creative Economy” initiative.

The number of start-ups in the country surpassed 30,000 this year, up from 2,000 some 16 years ago, according to data released by the Small and Medium Business Administration.

And yet Park pointed out that many of the start-ups are focused towards the local market and rarely made it to successful exits by cross-border mergers and acquisitions, as many Israeli companies had done.

After 15 years studying and working in Israel, Park has dedicated himself to learning the secrets behind the success of Israeli tech entrepreneurs and using the knowledge with early-stage start-ups through KSP.

Park moved to Israel in 1995 on the suggestion of his parents, who are devout Christians. His parents wanted him to receive a Jewish education. He graduated from Hebrew University of Jerusalem with a B.A. in general studies and Hebrew Language, later earning Master’s degrees in the language at Tel Aviv University, before he worked at the Israeli branch of the Korea Trade-investment Promotion Authority, a state-run trade promotion agency.

Established in 2014, the KSP is led by four managing partners including Park, Aviram Jenik, Israeli angel investor and serial entrepreneur, and Eyal Victor Mamou, who formerly worked as a lawyer in his home country.

One of the biggest differences between Korean and Israeli tech start-ups becomes obvious from the beginning, Park noted.

“Many start-ups in Israel target the global market when they [start to] develop a product,” he said.

“But most Korean start-ups only look at the domestic market, an attitude that limits further growth.”

Mamou said Israeli start-ups’ inclination to go global is related to education. “From a young age, Israeli people are encouraged to ask questions and challenge authority when they engage in discussions.”

KSP not only provides start-ups with seed money but also uses an extensive network of mentors, mostly experienced entrepreneurs, investors and other experts from Israel and other countries to bring start-ups up to speed.

The firm offers legal and technical support and up to 30 million won in funds. Thirteen companies are now listed under the start-up accelerator. The service or product of the companies are based on technology, though sectors vary from medical fields to fintech. But a more important role than funding is guiding the start-ups to a business strategy that targets users across the world.

KSP supports companies in their early stages because it is easier to inject such a mind-set. The accelerator is looking for companies with future-forward, disruptive technology.

“We are interested in artificial intelligence and robotics, since they can bring about radical changes in many sectors,” Mamou said.