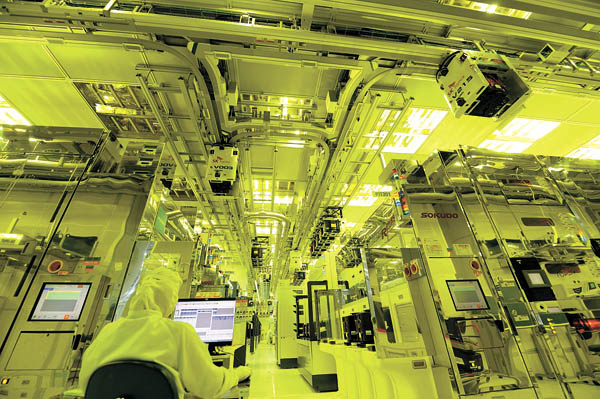 An SK Hynix employee looks at a monitor in a semiconductor factory. Provided by the company

After a long period of stagnation, SK Group is focused on taking part in the so-called creative economy in 2015 through information and communication technology (ICT) and efforts to enter new global markets.

SK Hynix continues to push its way into China, a country that has rapidly grown into one of the world’s largest semiconductor markets. In May 2014, SK Hynix finished building a 280,000 square-meter (69-acre) factory in Chongqing, China, that assembles semiconductor memory chips. Its major item is NAND flash products, and the factory is capable of producing 80 million per month. The factory employs over 1,200 employees and is expected to generate annual sales of approximately $200 million.

The recent semiconductor factory is not the first business SK Hynix has rooted in Chongqing, the center of China’s Western Development Strategy and one of the leading cities in the global IT industry.

In the same area, SK Hynix has already set up a joint factory with Chinese oil and gas company Sinopec and another plant that produces cathodes for lithium-ion batteries.

Meanwhile, affiliate SK Innovation is strengthening options for growth even in an unstable business environment.

One example is the establishment of the Naphtha Cracking Center, which produces basic petrochemical materials. Located in Wuhan, China, the factory began operating last year.

Another growth area being explored by SK Innovations is the United States. In June 2014, SK Innovation obtained two oil fields through SK E&P America. The two properties are worth a combined 378 billion won ($320 million).

SK Lubricants, on the other hand, opened the door to Europe’s base lubricant market by joining forces with Spain’s Repsol. The two opened a base oil plant in Cartagena, Spain, which began operating last year.

In the ICT sector, development is being led by SK C&C. The affiliate announced that this year’s goal is to discover new growth opportunities in the global ICT market and develop business models based on global partnerships.

Last year, the affiliate’s global ICT sales surpassed 415 billion won, equivalent to 17.1 percent of its annual revenue and a 136 percent increase compared to the previous year.

The achievement was the result of constantly developing new growth engines like the semiconductor business and C&C’s car rental service, SK Encar.

SK Group’s expansion abroad is not confined to services and products but also includes developing relationships through cooperation.

On March 4, SK Group signed a memorandum of understanding in Saudi Arabia with Saudi Telecom, promising to share the model for the group’s Sejong Creative Innovation Center.

SK will offer a version of the center tailored to Saudi Arabia and suggest ways in which the creative economy, which promotes mutual development between start-ups and conglomerates, could be brought to the nation.

“Regardless of fast changes in the business environment due to exchange rates and falling oil prices,” said Lee Man-woo, a spokesperson for SK Group, “SK will continue to develop new growth engines by promoting the creative economy in the ICT sector and searching for opportunities in overseas markets.”