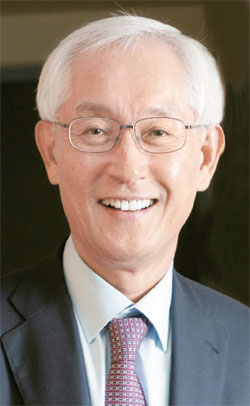 Oh Jong-nam, who retired as executive director of Unicef Korea earlier this year, may have a long list of professional accomplishments to his name, but his work with the children’s aid agency has given him “priceless” experiences.

His titles have included executive director of the International Monetary Fund; the presidential secretary for economic affairs; a senior adviser for the law firm Kim & Chang; nonexecutive director at GM Korea and Samsung Securities; and an emeritus professor at Seoul National University.

But at the end of his two-year term with Unicef Korea in March, the 63-year-old had little to boast about in terms of his salary. His efforts leading Korea’s branch of a United Nations program devoted to children’s rights and development brought him a wage of only 1 won, which is equivalent to $0.0009.

In an interview with the JoongAng Ilbo, an affiliate of the Korea JoongAng Daily, Oh looked back on his work with Unicef and explained why he was paid so little.

Q. How did you end up receiving just 1 won?

A. The notebooks and pencils I studied with when I was young were sponsored, and I later came to learn that it was from Unicef. Having grown up in a generation where such aid was common, I felt privileged enough to be able to pass down that kind gesture through the executive directorial position at Unicef Korea without being paid. But company policies disallowed me from going absolutely free, which is why I chose to receive just 1 won. The past two years of experiences were priceless, and I feel so grateful [for having been a part of it].

What do you mean by priceless experiences?

Helping others doesn’t necessarily mean that you’re ‘helping others.’ Besides the beneficiary feeling appreciation, you can feel a sense of accomplishment in having done something meaningful. Through my work at Unicef Korea, I learned that helping others essentially means helping myself.

What part of your job at Unicef Korea was the most memorable?

Among the contributors, there was a company named Ki Chang Construction, which collected all the small change below 1,000 won from the salaries of their employees and donated the entire sum once it reached 20 million won. Some of those employees were industrial trainees from Southeast Asia. I was so thankful to hear they felt proud to help children struggling somewhere in Africa.

How would you define a “good company”?

Corporate social responsibility used to refer to a form of corporate self-regulation in vowing to make financial donations. But now, I think of it more as the ability to please all of the interested parties, including consumers, employees and the government, and seeing its reputation improve in the end.

What role do consumers have in that idea?

The greatest deficiency of a market economy is that the winner takes it all. Nowadays, only the world’s best can survive in such a system. At a time like this, who do you suppose holds the greatest power in making change? It’s only right that the haves, rather than the have nots, take initiative in the social movement of building a better place for everyone to live in; this also is an impetus for creating a sustainable society. The more discontent people are in society, the more likely it will fall apart. Fundamentally, helping others is helping yourself.

This article was written by Daeil Foreign Language High School students interning at Tong, a JoongAng Ilbo-led online news outlet for teenagers, which launches on Sept. 22.