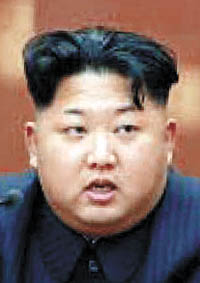 North Korean leader Kim Jong-un made his first published comments on the six-point agreement reached Tuesday with South Korea after 43 hours of talks, calling it “a crucial landmark occasion for defusing acute military tension and putting catastrophic inter-Korean relations on the track of reconciliation and trust.”

Kim made his remarks at a meeting of the Central Military Commission of the Workers’ Party of North Korea, which was presided over by him and reported by the state-run Korean Central News Agency (KCNA) on Friday.

Kim’s positive tone came a week after he put North Korea’s frontline units in “a state of quasi-war” after the North fired artillery shells across the border into the South on Aug. 20.

In an English dispatch by the state mouthpiece, Kim said the negotiations that produced “a crucial landmark occasion of defusing” tensions were held under his country’s initiative.

“He said that this time the DPRK proposed the North-South high-level urgent contact on its own initiative and put under control the situation which inched close to an armed conflict,” reported the KCNA in its English report, adding that the talks cleared “the dark clouds of war that hung over the Korean nation.”

DPRK is an acronym of North Korea’s official name, the Democratic People’s Republic of Korea.

The report said the meeting “analyzed and reviewed” measures taken by the party during days of heightened tension and “on the basis of them, it discussed important strategic tasks to bolster the national defense.”

While Kim’s remarks at the meeting were reported on Friday, the actual date of the meeting was not disclosed, although North Korea usually reports important events one day later.

While the agreement has fueled expectations of an improvement in inter-Korean relations, which have been frozen for seven years, the South Korean government has been cautious about whether North Korea will move forward after the agreement.

During the undated meeting, Kim dismissed some members of the central military commission and appointed new officials to replace them, the KCNA reported. It did not say whether the reshuffle was linked to the land mine detonations on Aug. 4 on the southern side of the demilitarized zone, which Seoul said Pyongyang was behind. The planted land mines, which maimed two patrol guards, escalated tensions and the two sides braced for a direct military clash along the heavily fortified border.

Kim’s remarks appeared to reflect the North’s desire for further talks with the South to resume business and cultural exchanges that were halted under the so-called May 24 sanctions, which were imposed five years ago by the Lee Myung-bak government in retaliation for the sinking of the Cheonan warship.

Jeong Joon-hee, a ministry spokesman, said at a briefing Friday that while the government welcomed Kim’s comments, Seoul would continue to “urge the North to carry out promises” drawn up in the talks.

As a follow-up to the agreement, the South Korean Red Cross proposed to hold working-level talks at the border village of Panmunjom on Sept. 7, to discuss reunions of families separated by the 1950-53 Korean War, Jeong said.

In South Korea, 66,292 people have registered to reunite with their relatives as of July, and 80 percent of them are 70 years old or older.