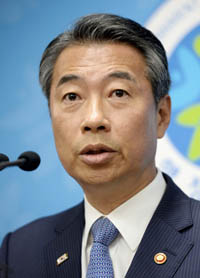 Chong Jong-sup, the minister of government administration and home affairs, issued an official apology Friday over his remarks wishing the ruling party victory in the next general election.

Despite Chong’s apology, the main opposition New Politics Alliance for Democracy (NPAD) continues to demand he step down for breaching the political neutrality required of government workers, including ministers.

The opposition party threatened to file a motion of impeachment against Chong on Friday.

On Thursday, the NPAD filed a complaint to the National Election Commission requesting an investigation into Chong’s remarks.

“I was asked to propose a toast at the end of the dinner on Tuesday,” said Chong at a press conference Friday.

“As I was not accustomed to making remarks when proposing a toast, I used the expression on a brochure at the dinner. It was just meaningless, well-wishing remarks without any political intention.

“I am really sorry for the controversy and I will be mindful so that it won’t happen again,” he added.

“I will emphasize once again that the Ministry of Government Administration and Home Affairs will observe political neutrality when managing elections, which the ministry always has.”

When a reporter asked if he would step down, Chong replied, “I will do my best in my job as a minister.”

Asked about any plans to run in the next general elections, Chong flatly denied them. Rumors in political circles say Chong is trying to run for a seat in his hometown, Gyeongju, North Gyeongsang.

The NPAD said it may propose a motion of impeachment against Chong.

“We need to let the general public know of the illegality of Chong’s remarks by proposing a motion of impeachment against him, the minister in charge of managing elections,” said Lee Chun-seok, chief deputy floor leader of NPAD.

“The Supreme Council of the NPAD reached a consensus on the matter. But we will review further when to propose the motion,”

After Chong issued his apology, NPAD spokesman Kim Sung-soo said, “Chong has already lost his qualification as the minister who is in charge of managing elections. Who can believe that he will fairly monitor irregularities in election campaigns as he has already blessed the ruling party with ‘Wish for victory’?”