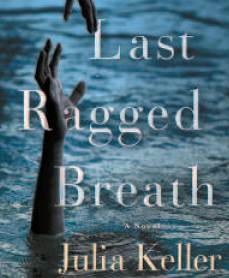 Each of us has a story that defines us as an individual. Maybe it’s the truths and lies we tell ourselves about ourselves, our reputation or our work. Sometimes that tale is all we have - and it can be worth everything.

A myriad of characters’ personal stories boosts the plot in “Last Ragged Breath,” Julia Keller’s excellent fourth novel about prosecutor Bell Elkins. No one knows more about how a personal story defines a person than Bell, who survived a traumatic childhood in Acker’s Gap, West Virginia; built up a law practice in Washington, D.C.; and then returned to her economically depressed hometown to make it a better place.

Royce Dillard’s story did more than define him; it also represented the power of hope and unconditional love. Royce was two years old when he became one of the few survivors of the 1972 Buffalo Creek flood, a real West Virginia tragedy. Royce lived because his father got him to safety before perishing along with his wife. Now a recluse in a ramshackle house with a pack of cast-off dogs, Royce lives off a small settlement from the mining company whose negligence caused the flood.

The past is again news when Royce is accused of murdering Edward Hackel, who was trying to force Royce to sell his land to the new Mountain Magic resort. The project would bring many needed jobs to the area.

“Last Ragged Breath” is as much about the hardscrabble people as it is about a town that has lost so much. Acker’s Gap is synonymous with a “steady cascade of falling-down shacks and crumbling roads ... along with red spikes of random violence.” The comment “places where nothing green would ever grow” almost seems like a compliment.

Keller’s affinity for fine character studies continues to shine. Bell isn’t the easiest character to like, but her intentions are without fault and her personal growth throughout the series has been a pleasure to read.

A Pulitzer Prize-winning journalist, Keller captures the ennui of a community paralyzed by a lack of opportunities, yet still has hope and even dignity in “Last Ragged Breath.” AP