How Welles and Huston tried to make one more film

How Welles and Huston tried to make one more film 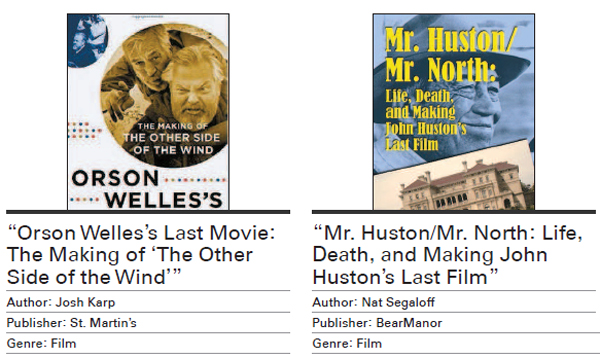 Few great movie directors end their careers on a high note. Alfred Hitchcock didn’t. Howard Hawks didn’t. Anyone who has sat through “7 Women” knows that John Ford certainly did not.

Orson Welles is among the great directors who are praised in spite of their final films. John Huston, on the other hand, managed to keep audiences on their toes to the very end. Reading about their last cinematic gasps in two new books aimed at movie buffs is to appreciate their obsession with shooting movies against all odds.

Welles (1915-1985) remains a fascinating figure in film history as much for his successes (“Citizen Kane” and “Touch of Evil”) as for his all too many failures. He is the rejected genius of American movies, his own worst enemy in an industry that provides plenty of enemies to start with.

In Welles’ centennial year, Josh Karp’s “Orson Welles’s Last Movie” serves as a primer about the director’s life and career while detailing how Welles spent years, beginning in 1970, trying to make a movie about a famous director trying to make a movie. He uses and abuses people who work for next to nothing just to be with him, coaxes or fools friends and strangers into accepting roles in the film, even skirts the law when it comes to obtaining location permits. More than once his crew pretends to be college students on a class project as Welles stays out of sight.

As told by Karp, the making of the unfinished “The Other Side of the Wind” could be a satire on Hollywood if not a screwball comedy (Imagine Welles barking directions from the backseat of a Mustang parked on a neighborhood street as his actual mistress and another actor perform a sex scene in the front seat, the crew rocking the car and dousing its windows with a garden hose to simulate a drive in a storm). Welles is charming one moment and irascible the next, displaying flashes of temper amid a steady beam of genius and selfishness.

Welles talked his friend John Huston into playing the fictional director. In real life Huston (1906-1987) played the Hollywood game with a much defter hand. While Welles scrounged for money, Huston cranked out six feature films in the 1970s, most notably “The Man Who Would Be King,” then another half-dozen in the 1980s. His final two films were showcases for his daughter, actress Anjelica Huston, who won an Oscar for “Prizzi’s Honor” and starred in “The Dead.”

As author Nat Segaloff suggests in “Mr. Huston/Mr. North,” Huston wanted to leave his son Danny a similar legacy by setting up the 25-year-old to direct his first feature film. The elder Huston had signed on to play a key role in “Mr. North,” based on a Thornton Wilder novel, even though he knew emphysema was likely to keep him from following through. It did, and Robert Mitchum stepped in.

Segaloff was the only reporter granted access to the set during the six weeks of location shooting in Newport, Rhode Island, in the summer of 1987. His firsthand account is less about Huston - much of that time he lay dying in a hospital - and more about a movie set under pressure. While hampered by his story’s connection to a minor film, Segaloff provides telling vignettes featuring Mitchum, Lauren Bacall and other “Mr. North” cast members and crew who ride out the modestly budgeted film’s problems to serve the last request of their longtime friend.

Forty-five years after Welles began filming “The Other Side of the Wind,” it remains a cinematic Sasquatch, intriguing for glimpses of footage on YouTube and keeping alive the idea of another Welles triumph. A recent crowdfunding project has sought to raise the money needed to finish it. Orson Welles’ last film, with John Huston as its star, might yet provide two Hollywood lions a final roar.