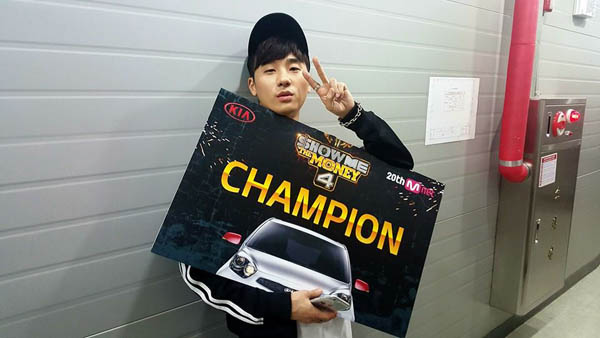 Rapper Basick emerged as the final winner Friday of the controversial rap audition program “Show Me the Money 4.”

The finale results, which aired Friday, came as a shock to viewers, as Song Min-ho, a member of the YG Entertainment boy band Winner and an instant fan favorite, served as the lone frontrunner throughout the competition.

Even before the season’s final segment, the show’s competitors jokingly alluded to the fact that Song was a shoo-in to win. But in the end, it was 29-year-old Basick who clinched the ultimate victory, taking home 100 million won ($85,000) in prize money.

Basick and Song each staged to songs in the final show.

Basick performed “Good Day” and “I’m the Man,” while Song pulled off “Okey Dokey” and “Victim and Cheers.”

All performances were judged by seated audience members.

However, despite his efforts, Song failed to receive overwhelming support from the crowd. Basick defeated Song, garnering around 30 million won from the audience, with the K-pop star only receiving approximately 15 million won in the vote.

“I don’t know how I feel,” Basick said after the results were announced. “I can’t believe it. I’m really happy and also very thankful for the people who helped me [win this competition].”

Basick’s appearance and subsequent victory is likely to bring with it a new set of fans, though the 29-year-old has long been recognized among Korean hip-hop lovers. He debuted in 2008 and has often been described by Korean hip-hop fans as an artist to know.