[Cooking with Her Excellency, Ecuador]Shrimp ceviche is an easy-to-make side

[Cooking with Her Excellency, Ecuador]Shrimp ceviche is an easy-to-make side


Every great capital has a diplomatic corps representing their countries and promoting their own cultures. Ambassadors are expert entertainers and their spouses are often skilled at introducing the cuisine of their homeland to their foreign hosts. In this series, the Korea JoongAng Daily asks the spouses of Seoul’s ambassadors to introduce our readers to a favorite entree from their homelands. In each installment, her excellency will be joined by a chef from one of the two InterContinental hotels in Seoul who prepares a Korean dish that complements the foreign offering. Mashitge deuseyo, buen provecho and bon appetit!

When Ecuadorian Ambassador Oscar Herrera Gilbert decided to accompany his wife to the cooking session for this series, he had more in mind than just observing. Boasting that he’s a better cook, the entrepreneur-turned-diplomat who owns several farms back in his home country wanted to make full use of his abilities.

“When we were getting dressed in the morning, he asked me whether he should wear an apron,” said Maria Roura De Herrera, rolling her eyes at her husband, who was already rolling up his sleeves upon arrival at the hotel.

“I said: ‘No, Oscar. You’re an ambassador and you should dress like one.’”

In preparing the signature Ecuadorian dish shrimp ceviche, the couple worked hand-in-hand, both asserting that cooking for them is “all about the feel.” 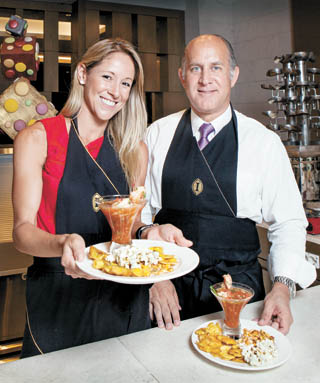 Q. Why did you choose shrimp ceviche for today’s main dish?

A. It is an Ecuadorian traditional dish that is especially popular in the coastal regions, where shrimp is caught. Out of various types of ceviche, I’ve chosen shrimp today because it’s one of Ecuador’s key exports to Korea. Preparing this mouth-watering Latin dish takes very little time, and the recipe that I’ll be using today has often won over the hearts of my friends. In fact, I enjoy serving this dish when having Ecuadorian guests over to my residence because I think it’s a great way to remind us of home.

What Korean culinary aspect can you find in your Ecuadorian dish?

In general, Koreans seem to enjoy eating seafood, which is another reason why I wanted to introduce this menu item. The recipe that I’m using today is not a traditional way of cooking shrimp ceviche, which goes to show that Koreans, too, can add whatever twists they like to this recipe.

In the western coastal regions of Ecuador, seafood is considered the star of the show, as it comes cheaply and in abundant portions, whether fried, grilled, roasted or bathed in scrumptious sauces. 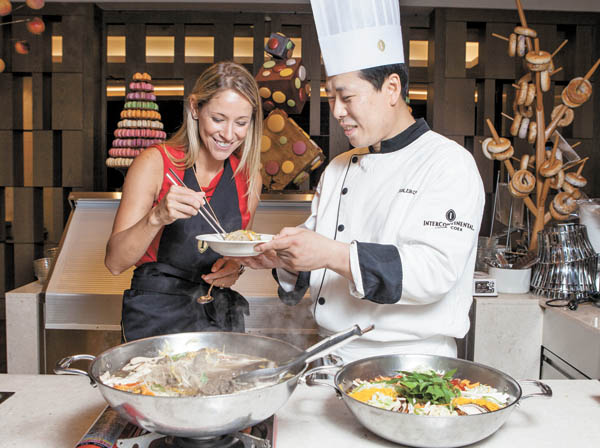 Bolon, or Ecuadorian green plantain dumplings, is one famous local dish that is made with fried plantains mashed into dumplings then filled with either cheese or pork skin, later to be served with black coffee and aji criollo, an Ecuadorian hot sauce made with hot peppers.

Another one of our specialties is viche, a peanut-based fish stew with balls of mashed plantain and yucca, also known as cassava, finished with a squeeze of lime.

Ecuadorian food in general is diverse, as each region features different dishes and styles of cooking, all of which depend on the altitude of the land or agricultural conditions associated with that.

In the highlands you’ll find that cuy, or guinea pig, is a very popular, traditional type of meat often served with rice, corn and potatoes. Popular kinds of street food in those highland markets include hornado, roast pig cooked whole.

At the lower altitudes you will find fresh fruits of all sorts, like granadilla, passion fruit, naranjilla, uvilla, taxo, tree tomato and several kinds of bananas.

Regarding alcoholic beverages, aguaradiente, which is made out of a plant called aniz, would probably be the most popular drink in Ecuador. 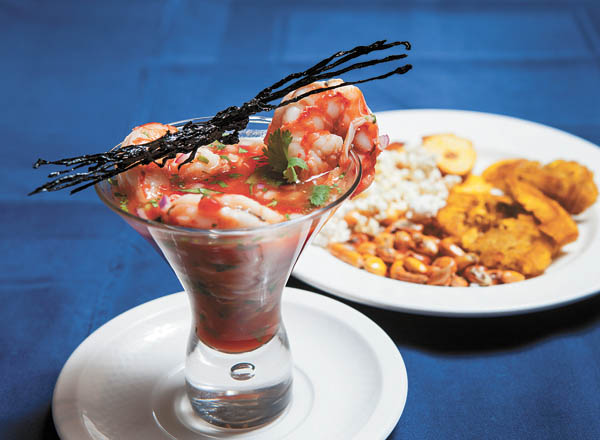 Green plantain, limes, red onions, quinoa and some herbs and fruits are difficult to find. I sometimes get lucky on my visits to Itaewon-dong in central Seoul, or Costco. When my husband goes to Ecuador, I always ask him to bring me all the ingredients I can’t find here but often incorporate in my home cooking, as well as a few snacks.

I like having Ecuadorian chocolates prepared at my house, just in case we have visitors, so my husband buys them from Ecuador. Other treats he brings me are cookies and fried green plantain snacks. Goya Sazon, a type of seasoning, can also be found in his luggage.

What are the best restaurants in Seoul serving Ecuadorian cuisine or similar?

Unfortunately, there is no Ecuadorian restaurant in Seoul yet, but my family chooses from a variety of other restaurants when going out to eat. Some Mexican eateries like Don Charly and Los Amigos in Itaewon-dong, or a Spanish restaurant named Terreno in Samcheong-dong, central Seoul, are fine alternatives. 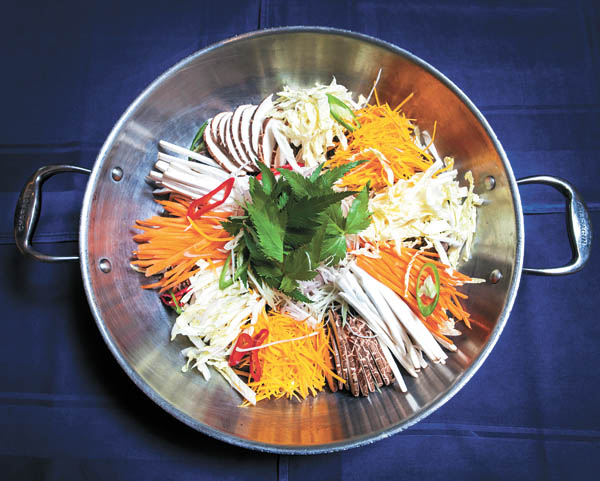 What Korean dishes are you fondest of and why?

My family has tried many local dishes, and some of our favorites ended up being galbi [barbecued short ribs], bulgogi [barbecued beef], bibimbap [rice with mixed vegetables], samgyetang [chicken soup with ginseng] and galbitang [hot beef rip soup].

I’ve only tried to make authentic Korean food once, when I joined a traditional culture tour here and made makgeolli, or rice wine. But my entire family very much enjoys local food, like my daughter who says her favorite dish is galbitang and always drags my husband and I to a restaurant in Insa-dong, central Seoul.

Korean cuisine is generally very healthy, with lots of vegetables and less sugar and salt.

Please give us your personal observations about Korea, how it compares to your country or other countries which you have lived.

Unlike many other countries, the urban landscape here is very well-organized and the people are highly disciplined. Koreans are competitive and meticulous, and although Ecuador has in large part yet to reach that prominent level, we’re determined to be in the process of getting there someday.

What Ecuador has that Korea does not, however, is balance in life. Ecuadorians deem true happiness and family as very crucial values, but I think many Koreans have different set of priorities.

My family enjoys cycling, and the best place for that would be parks alongside the Han River, where it’s safe and pleasant to relax.

Outside of Seoul, we’ve been to Busan many times, with the last being in March. Every time my husband has a business trip to the southern port city, I enjoy accompanying him because there’s the beach, which reminds me of home and all the precious memories visiting the waters.