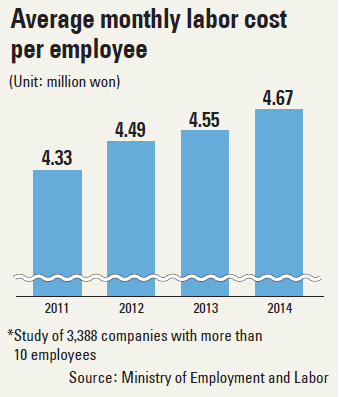 It cost an average of 4.67 million won ($3,956) per month last year for domestic companies to keep on one employee, according to data released Sunday by the Ministry of Employment and Labor, up 2.6 percent from 2013.

The study looked at 3,388 firms with more than 10 employees and showed that the rise in labor costs has somewhat slowed in recent years.

Data showed that the increase in indirect labor costs - retirement payments, major insurance coverage and other welfare-related expenses such as residential aid - had a more significant rise than direct labor costs like wages and bonuses.

Indirect labor costs rose 4.5 percent, to 1 million won per month, led by retirement payments, which spiked by nearly 11 percent year-on-year. Costs related to welfare and training dipped by 2.1 percent and 5.4 percent, respectively. Of total costs for indirect labor, retirement payments given to employees leaving a company stood at 457,000 won per month, with welfare and training costs at 208,000 won and 25,000 won, respectively.

“The dip in bonuses, welfare and training expenses reflects declines in corporate profits due to the economic slowdown worldwide,” a labor ministry official said. “Retirement payments rose since more firms have offered pension funds for their employees.”

Non-legal welfare costs per month included 78,000 won for meals, 24,000 won to go toward the education of an employee’s children and 21,000 won for transportation expenses.

Looking at labor costs across industry categories, electricity, gas and water supply companies had the highest monthly labor costs at 7.7 million won per person, followed by the financial and insurance sectors with 7.5 million won. The average in the manufacturing sector recorded 5.37 million won, and publishing, broadcasting and information services businesses spent 5.1 million won.

The amount spent on labor costs also correlated with the size of the company, data showed.