The field is narrowing in the race for two multibillion-dollar casino businesses in Korea. 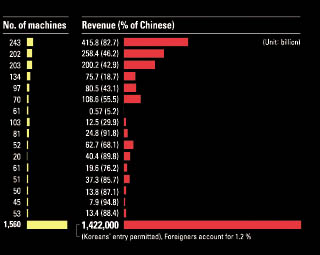 The Ministry of Culture, Sports and Tourism on Thursday named nine potential sites that may be suitable. They include six sites in Incheon, four of which are located on Yeongjong island near the Incheon International Airport, as well as Busan, South Jeolla and South Gyeongsang.

The final decision on the two sites that will be given formal approval is to be made by the end of the year.

The successful operators will build a multipurpose casino complex equipped with a five-star hotel of more than 1,000 rooms; an international conference center; an entertainment facility such as performance theaters and a foreigners-only casino. 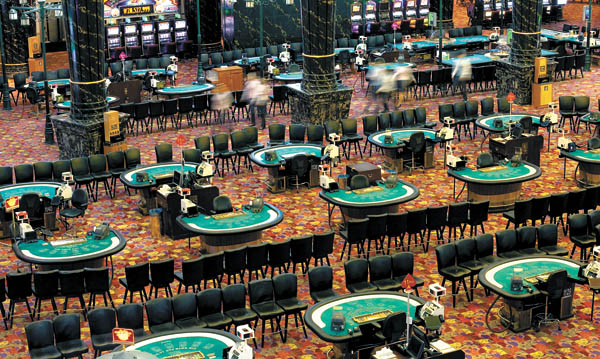 The government has identified nine sites suitable for the construction of casino resort complexes. Only two sites will be chosen from the nine by the end of the year. There are 16 foreigner-exclusive casinos in Korea today.[JoongAng Ilbo]

The developers’ proposal must include minimum investment of 1 trillion won, more than $500 million in investments from foreigners and a certain level of credit rating.

Earlier this year, 34 consortiums, including Korea’s leading retail conglomerate Lotte showed interest in the venture. As the nine locations have been selected it is unclear how many bidders for the two sites will remain.

The plan will undoubtedly spark fierce competition among local and foreign casino developers as it is the second-biggest business project next to the duty-free industry.

According to a report by the Ministry of Strategy and Finance and the National Tax Service, in the last decade the gaming industry - including casinos, horse racing and lottery - has grown 67.6 percent to a near 20 trillion won ($17 billion) market as of 2014.

This is a significant growth considering that the market was only 11 trillion won in 2005, and while the rest of the country was struggling in 2008 after the global market meltdown, the gaming industry grew 9.9 percent compared to previous years to almost 16 trillion won.

Revenue from the casino industry has grown sharply compared to other gaming industries. Between 2005 and 2014 it has surged 125 percent to 1.6 trillion won in 2014.

Analysts say that once the new casino business kicks off, which could be around 2020, it will expand to a 10 trillion won market.

“When calculating the Chinese tourists who will be flocking into the casino complex in Korea would be one-quarter of that of Macao, we project the market will grow into a maximum 10 trillion won industry or at least 5 trillion won,” said Yang Il-woo, a Samsung Securities analyst.

Already several foreign companies, including Hong Kong CTF, China’s Xinhualian and Cambodia’s NAGA Corp. have indicated interest in the casino bid and have already submitted a proposal. Korean bidders include Oceanview as well as the nation’s leading retail giant Lotte, Kolon Global and even the National Federation of Fisheries Cooperative.

However, the fishery cooperative may pull out as they proposed setting up the resort and casino complex in Noryangjin Fish Market in Seoul. Kolon may also drop their bid as they chose Chuncheon, Gangwon, to build a large scale resort around La vie est Belle Country Club, targeting tourists who will be visiting Korea for the Pyeongchang Winter Olympics.

Both Seoul and Chuncheon failed to be selected as possible sites for the casino resort complex.

Lotte Group may continue as they have been pushing forward with plans to build a large-scale resort complex at North Port of Busan, one of the sites chosen by the Tourism Ministry.

There are growing concerns, however, over the excessive concentration of casinos in Incheon. Six of the areas chosen on Thursday are located in Incheon. Before the selection, the competition was fierce as 17 bidders chose Incheon for their project sites while 12 applied for Yeongjong island. Yeongjong is close to the international airport and has a huge influx of Chinese as it is geographically close.

But there is concern over negative impact if there is too much concentration on Incheon. The largest port city on the west coast is dominated by Paradise, a Korean casino and resort group, that is already building a resort complex with a foreigners-only casino.

Paradise began construction last November and LOCZ is planning to break ground soon. Some in the industry say additional resort complexes should be placed on Yeongjong island citing an “agglomeration effect.”

“Las Vegas … or Macao have succeeded in the casino business by crowding in one place because casino players have a tendency of moving to the next building when games are not playing well,” an official from the casino industry explained.

There are 16 foreigner-exclusive casinos all over the country. Jeju has the most with eight casinos, then Seoul with three, and Busan two. However, the revenue of the 16 casinos combined is 1.38 trillion won, which is less than Kangwon Land’s revenue alone, at 1.42 trillion won. Kangwon Land attracts three million people, while the 16 casinos altogether attract 2.96 million people.

A casino industry official said, “While the number of foreign visitors are limited, excess competition in Yeongjong island may only worsen the profitability.”

In reality, foreign exchange earnings from tourism last year was $18 billion, a year-on-year increase by 24.4 percent. Earnings from casinos stood at $1.3 billion, only a 4.6 percent growth.

Whether to permit local players’ entry is another issue. Some believe that local people’s entry is critical to guarantee the profitability of the resort complex.

Sands, a major casino conglomerate in Singapore offered last November, is to invest 11 trillion won to build a resort complex in Jamsil, if regulations on local entry could be relaxed, even if they have to set limits on entry hours and the amount of money for betting.

The Korean government and civic groups maintain restrictions on local entry is crucial to prevent local people’s addiction to gambling. Furthermore, under existing law, no casino except for Kangwon Land is permitted local entry until 2025.

Any drop in Chinese business could wreak havoc on the domestic foreigner-exclusive casino market.