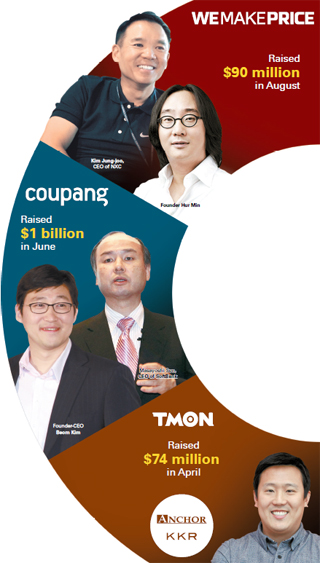 Bottles of mineral water, fresh figs from Jeolla, a discount coupon for a pedicure service at a nearby nail salon and reduced-price airline tickets.

It’s hard to imagine the products existing in a single shop, but you can find them all on what Koreans call “social,” which guarantees fast delivery and low prices.

Modeled after Groupon, a daily deal provider from the United States that began in 2008, the three launched here in 2010. Since then, they have transformed the landscape of Koreans’ online shopping, taking advantage of the nation’s advanced mobile network and the fourth-highest smartphone penetration rate in the world.

Although they run their own websites, about 80 percent of orders are placed via smartphone.

Celebrating their fifth year of operation this year, all three have recently received funding from third parties that is expected to keep them evolving.

Taking the lead among the three is Coupang. The company announced on Aug. 26 it would launch a new service in the so-called online marketplace sector. An online marketplace or open market - both terms used only in Korea - serves as a medium between sellers and buyers online.

Social commerce services, on the other hand, take care of all aspects of shopping, from inventory to delivery and customer service.

“The new service is intended to widen customers’ choices and to lower barriers to entry for various smaller sellers,” said a Coupang spokesman.

Coupang’s latest decision corresponds to its declaration in March that it aims to become a comprehensive mobile shopping platform like Amazon, with CEO Bom Kim saying in a press conference the company refuses to be classified as just a social commerce site any longer.

“Classification of the types of shopping platforms has become irrelevant,” said the Coupang spokesman. “Coupang is neither an open market nor a social commerce site. It is an unprecedented business model.”

When Coupang begins operating its open market in mid-September, it will be competing with established brands like 11th Street, run by top mobile carrier SK Telecom, as well as Gmarket and Auction, both Korean subsidiaries of the United States’ eBay.

Even though Coupang posted revenue of 348.4 billion won ($295.3 million) last year - about half that of Gmarket and Auction, at 733.9 billion - the aggressive newbie could soon become a formidable threat for existing open markets, experts say.

User traffic already signals the challenge. According to Rankey.com, an online traffic tracking service provider, Coupang had the most users among mobile e-commerce apps, trailed by Ticket Monster and WeMakePrice from Aug. 16 through Aug. 22. 11th Street took the fourth spot.

Among all mobile apps in Korea, Coupang ranked No. 12 by number of users, with Ticket Monster at No. 32 and WeMakePrice at No. 33. KakaoTalk was No. 1 and Facebook was No. 7.

“We will wait and see for now, given it will take a while [for Coupang] to collect items for sale,” said a spokeswoman with a major open market operator who asked for anonymity. She said an open market needs to have an inventory of at least 40 million items before launching operation. “What really counts is the business model and acquired know-how,” she said.

Coupang’s bold expansion has been made possible by the astronomical investments it has received in the past two years. Most recently, Japan’s third-largest wireless carrier SoftBank invested 1.1 trillion won by purchasing newly issued shares.

Although the company has declined to unveil the percentage of the stake SoftBank gained in the June deal, the investment valued Coupang at an estimated 5.5 trillion won, according to industry insiders.

Coupang CEO Bom Kim is the top shareholder and SoftBank is assumed to be the second- or third-largest, although the company cannot disclose specifics under the confidentiality agreement it signed with Softbank, according to a Coupang spokeswoman.

“Masayoshi Son [the CEO of SoftBank] is known as someone who makes it a rule to invest only in companies that have their value increase tenfold in 10 years,” said Suh Yong-gu, a marketing professor at Sookmyung Women’s University. “By choosing Coupang [among the three players], he has officially endorsed the company’s future prospects.”

The academic specializing in e-commerce said it has become meaningless to divide online shopping malls into different types.

“Consumers have zero interest in the nature or origin of the shopping platform they use,” he said, “Various forms of shops including those that began offline - department stores or discount chains - have jumped onto the bandwagon of online shopping. If you lose in the online battle, you have no choice but to exit the field.”

The scale of online shopping in Korea, encompassing both Web and mobile platforms, has been rising in recent years. The volume of transactions, which stood at 27.4 trillion won in 2010, will grow almost twofold to an estimated 52.3 trillion won for this year, according to the Korea On-Line Shopping Association.

The combined transaction size of Coupang, Ticket Monster and WeMakePrice is projected to reach 8 trillion won this year, about one third of the entire mobile shopping market, at 22 trillion won. By 2020, the figure will surpass 100 trillion, experts predict.

Prof. Suh says any of the three could eventually outperform 11th Street, given the first three were hatched online, which makes them more adaptable to the rapidly changing mobile shopping environment.

Still, the three social commerce players have a vulnerability to overcome: all saw operating losses last year despite expanded revenue. Coupang’s operating losses in 2014 were 121.5 billion won, according to its audit report, as it spent over 150 billion won stepping up its logistics and setting up its own super-fast delivery system called “Rocket Delivery.”

The company established a massive logistics center, bought trucks and hired workers to make it possible for goods to be delivered the same day they’re purchased.

WeMakePrice posted 29 billion won in operating losses and Ticket Monster lost 24.6 billion won in 2014 after aggressively investing in marketing and slashing prices to lure customers away from each other and secure their existing customers.

The three players hope the latest string of funding will help them reduce losses and start earning profits.

“They have no choice but to continue pumping up the revenue volume by locking in existing customers,” said Lee Ji-young, an analyst with LIG Investment & Securities, when asked about the operating losses. Hefty spending on human resources for deliveries was one of the causes of the losses in Coupang in particular, she noted, and the cash injection could help ease the problem.

In June, Ticket Monster raised 81 billion won from its top shareholder, a consortium of American private equity firm KKR and Hong Kong-based Anchor Equity Partners. The funding was part of a deal a month earlier, when the consortium and Ticket Monster’s founder and CEO Daniel Shin acquired a combined 59 percent stake in the company from Groupon, the former top shareholder.

The consortium now holds a 46 percent stake and Shin has 13 percent. Groupon still holds 41 percent as the second-largest shareholder.

CEO Shin vowed in April to push ahead with improving mobile technology infrastructure, and said the company will launch a new project later this year with the funding that valued the company at $782 million.

“I am pretty sure all three players won’t be able to post an operating profit this year,” said a Ticket Monster spokesman. “But profit will turn up in the end as we try with diverse projects to propel growth.”

He added the company is in discussion with an investor about getting funding next year similar to the massive amount Coupang received, without further elaborating.

Kim’s investment came four years after he put 804.5 billion won in NCsoft, a Korean game publisher, and his decision reflects the optimistic future of the e-commerce firm.

“WeMakePrice posted 1.6 trillion won in transaction volume last year and has achieved an annualized 60 percent growth in the first half of this year,” said NXC in a statement. “The company is seen to be competitive enough in terms of user traffic and transaction volume.”

WeMakePrice, wholly owned by the founder Hur, is valued at around 1 trillion won, according to NXC’s evaluation.

The online shopping battle is expected to get fiercer as business models in the retail industry continue to transform and boundaries between different platforms get blurrier.

“We don’t consider ourselves competing only with the other two players. All kinds of retailers are in the middle of transitioning as they strive to devise their own answers to offering goods at the lowest price tag and at the fastest speed,” said a spokesman with WeMakePrice.

Devin Wenig, CEO of eBay, also said in an interview in Seoul in April that the world of e-commerce and commerce have now merged, and retail now necessitates an omnichannel approach.

“It’s not about the phone or the desktop or the store - it’s about all of those,” he said. “Today’s shopper hops from desktop to tablet to smartphone to brick-and-mortar, and the most successful retailers address their needs across all channels. We no longer think of mobile as a stand-alone department, we have mobile embedded in everything we do.”

“There is a saying old soldiers never die they just fade away,” said Prof. Suh. “But traditional offline retailers won’t just sit back and watch. Online is now a battlefield of retailers with varying origins - a mixed martial arts match where boxers, wrestlers and even soccer players fight against each other.”