‘Made in Korea’ products in China exceed 10% for first time

‘Made in Korea’ products in China exceed 10% for first time 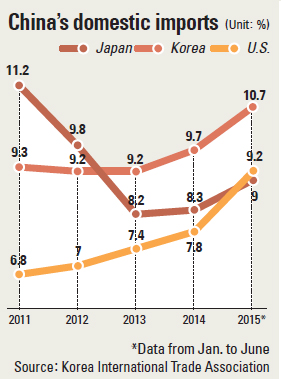 The market share of products with “Made in Korea” tags in the Chinese import market has exceeded 10 percent for the first time, mostly thanks to a slower reduction in imports compared to other countries.

According to a report by the Beijing branch of the Korea International Trade Association (KITA) on Monday, Korean products held 10.7 percent of China’s import market in the first six months of this year.

Korean products became China’s most purchased import products in 2013 for the first time in trade history, beating Japanese products by one percentage point.

Chinese imports decreased by 19.1 percent year-on-year in the first six months of this year, mostly with the shrinking import of raw materials like crude oil and steel.

Korean exports to China shrank a relatively smaller level compared to other countries, by about 7.2 percent year-on-year to a record $82.8 billion in the first half of this year. Australia’s exports to China dropped the most, by 32.6 percent, followed by Germany’s 13.3 percent drop and the United States’ 6.8 percent.

Korean-made memory and system processor chips sold about $20.8 billion in the first half of this year, which accounted for 50 percent of China’s import semiconductor market. They have seen a steady double-digit sales growth for the past two years.

Korean cosmetics are the No. 2 bestselling imported cosmetics, following France, and are now grabbing about 23.6 percent of the market. Cosmetics products, ranging from skin care products to lipstick, sold more than $311.5 million in the first half of this year, pushing sales growth of up to 630 percent year-on-year.

The report said the Korea-China Free Trade Agreement (FTA), which was introduced to a committee in Korea Monday afternoon, will further contribute local products to the Chinese market, while the export of intermediary goods - Korea’s flagship export items so far - has recently faced challenges due to the slowdown of China’s economic growth and technological advances.

The FTA is expected to boost sales of Korean-produced reliable agricultural and fisheries as well as medical, baby products and environment-related products, the report added.