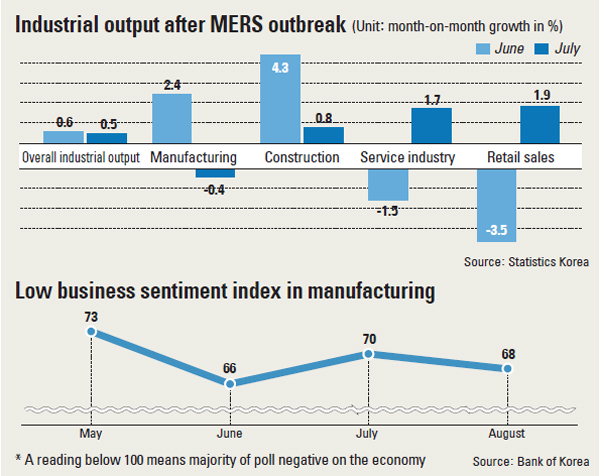 Korea’s service industry and retail sales improved for July, bouncing back from the damaging effects of the outbreak of Middle East respiratory syndrome (MERS), but exports remained sluggish in the wake of slow global growth.

Retail sales also rose 1.9 percent on all items. Semi-durable goods, in particular, such as clothes, shoes, bags and other items for leisure, rose 7 percent in June.

On a yearly basis, however, the service industry still struggled in July, data showed. Compared to a year ago, production in restaurants and accommodation dropped 5.4 percent.

Overall growth in the service industry was pushed by finance, which rose 11.7 percent, and real estate, which rose 9.9 percent in July year-on-year.

“Although businesses in restaurants and accommodation still struggled on a yearly basis, the finance and real estate businesses saw growth,” said an official in the Ministry of Strategy and Finance. “It’s because historic-low interest rates spurred a wave of investors to the equity and real estate markets.”

While the service industry got back to normal after the impact from MERS, mining and manufacturing suffered an export slump in the midst of the sluggish global demand, including China, Korea’s biggest trading partner.

Production in mining and manufacturing dropped 0.5 percent in July from June, and a further 3.3 percent from a year earlier.

Month-on-month, manufacturing production fell 0.4 percent. Due to sluggish exports, stocks rose 0.6 percent from June to the highest level since 2000, while overseas shipments only rose 0.2 percent.

“Although we don’t forecast the Chinese economy will take a hard landing, its slowed growth is having an impact on the Korean economy,” the official said.

“Based on the real-time exports record, the current situation in exports is not that good.”

The August business survey index (BSI) also showed manufacturers felt less bullish about their businesses, with the subgroup’s index reading 68, down 2 points from a month ago, according to Bank of Korea data released on Monday.

The economic slowdown in China and regional economies was seen as a major drawback in the sector, industry experts say. Details of the index showed both bigger conglomerate manufacturers and smaller firms felt bearish about their businesses, with their BSI reading down 3 points and 1 point each, to 72 and 62.

September’s outlook BSI for manufacturers, however, rose modestly, up 1 point to 71, while the financial health BSI fell 1 point to 84.

“Some parts of manufacturing, such as the textile and pharmaceutical industries, have picked up since MERS was contained,” said Park Sung-bin, a BOK official in charge of company-related statistics. “But the slowdown in China and slowing exports have made the environment more challenging for major exporters.”