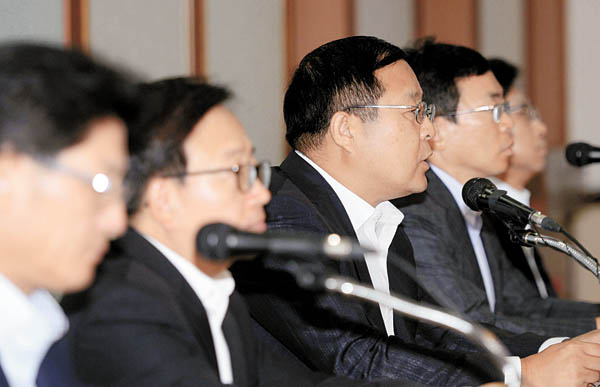 Kim Young-bae, vice chairman of the Korea Employers Federation, third from left, announcing the joint statement by the nation’s leading five business representatives on labor reform at the Korea Federation of SMEs’ office in Seoul on Monday. [NEWSIS]

Business lobby groups urged the government to ease regulations to make it easier to fire underperforming employees and pleaded with unions to accept a new system in which annual pay raises depend on performance, not seniority.

Representatives of big business and small said these measures are not aimed at cutting their labor costs but are ways to tackle youth unemployment.

In a press briefing held at the office of the Korea Federation of SMEs in Yeongdeungpo District, western Seoul, on Monday, five lobbying groups, including the Federation of Korean Industries (FKI), Korea Chamber of Commerce and Industry (KCCI) and Korea Employers Federation (KEF), jointly released a statement that urged the government to speed up labor reforms pursued by the Park Geun-hye administration and urged unions to go along with the reform to create more jobs for young people and promote healthier conditions in companies.

The lobbying groups said most of the nation’s major conglomerates, including Samsung, LG, Hyundai Motor Group and Posco, have been positively responding to the government’s recent labor reform drive by implementing methods to hire more workers and adopting the peak wage system, but such measures might only be temporary if the government and labor unions do not succeed in legal reforms of the labor market.

“Most regular workers in the country are under the step-increase system, which increases a worker’s wage every year in accordance with predetermined ratios regardless of performance,” said Kim Young-bae, vice chairman of the KEF. “But since the country’s regulations are too strict for firing underperforming workers, companies are hesitating to hire regular salaried workers, and that ultimately reduces the chances for young people to get jobs. In order to promote a labor environment in which companies can create more good jobs consistently, the government needs to revise related labor regulations as soon as possible. Under the current labor environment, it is hard for companies to expand investments and employment.”

As part of the labor reforms, the government has been trying to provide guidelines on how companies should deal with issues like firing workers, but the lobbying groups said guidelines are not enough. They want the government to revise related laws.

“Labor unions in the country need to help companies abolish a system that gives higher salaries to workers simply because they served for a longer period of time than other competitive workers,” said Lee Seung-cheol, vice chairman of the FKI. “It damages companies’ business competitiveness and eventually harms the overall economy. Labor unions also need to recognize that it is reasonable for companies to reform the wage system if it does not cut their total labor costs. Adopting the peak wage system is part of such efforts, and we can promise that we will consistently work on resolving unemployment issues for youth if such labor reforms make progress.”

“Companies are having a hard time in wage negotiations every year because unions often threaten companies with a strike when their demands are not met,” the lobbying groups said in a statement. “Labor unions should let companies hire temporary replacements during a strike period so that the two sides can make fair negotiations. Some aggressive and strong unions should stop making unreasonable demands - forcing union members’ children to be hired, for instance - because that disadvantages non-union member workers. If such issues are resolved, we promise that we will try to create more jobs for young people.”

Hyosung Group, one of the nation’s major chemical companies, said Monday that the company and its nine affiliates will hire 4,500 new workers through 2017, or 1,500 annually in the next three years. The company generally tends to hire about 1,000 workers per year.

Of the 1,500, the company hired about 1,000 in the first half and will hire 500 in the second, adding that 300 positions will be filled with college graduates.

“We want to help youth who are having trouble finding a decent job,” said Lee Sang-woon, vice chairman of Hyosung Group. “Since the company has been working on businesses that are considered new industrial growth engines, we thought providing more job opportunities is something we need to do.”

Hyundai Motor and Kia Motors started their recruitment for the second half of the year. Hyundai Motor said it will start accepting applications on its recruitment website (http://recruit.hyundai.com) for both college graduates and candidates who will receive a bachelor’s degree next February in 11 sectors, including research and development and auto parts development. Applications can be submitted on the website starting 9 a.m. today through noon on Sept. 14. Kia Motors said it started accepting applications yesterday at 1 p.m. on its recruiting page (http://recruit.kia.com), with an application deadline of 5 p.m. on Sept. 11 for college graduates.

The FKI also said Monday that it will hold a job fair for older workers with 180 companies partnering with the nation’s 12 major conglomerates. The fair will be held on Sept. 14 at COEX in Samseong-dong, southern Seoul.