K-pop star G-Dragon, or rather his holographic look-alike, performs almost every day at the digital theme park Play Kpop located in Seogwipo, Jeju Island. Provided by the theme park

There is a department store called My Color located in Dalian in the southern part of Liaoning Province, China. There used to be just two Korean clothing stores there three years ago, but now there are 10.

Jang Ping, who has been running the store called K-Fashion for three years, has recently changed her way of doing business. Unlike in the past, she now visits Korea once every two weeks. After browsing various Korean department stores and small clothing shops, she takes photos of clothes she thinks would sell well in China. Then, she instantly posts them on the Chinese SNS application WeChat with the question, “Are there any buyers for these clothes?” In response she gets real-time orders and the sale is completed. Jang’s method of selling items has become a new form of distribution for selling genuine Korean products.

“However, I couldn’t visit Korea for a month due to the outbreak of Middle East respiratory syndrome.”

In order to make up for the missed visit to Korea, Jang apparently went to a wholesale market in Guangzhou, the capital and largest city in Guangdong Province in southern China, to purchase clothes that were allegedly Korean in style. However, she returned home empty-handed because the clothes she saw didn’t fit what she was looking for. 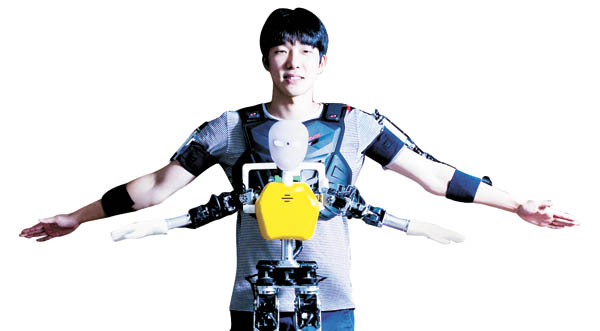 The dancing robot UXA90 has performed at K-pop concerts. By Kwon Hyuk-jae

Korean products and style have gained a major following in China.

According to Jang Hye-soo, a Korean working at a Dalian broadcasting company, Korean women’s way of shaping their eyebrows has become a hot trend in China. She added that in the past, Chinese people preferred curved eyebrows. These days, however, many Chinese women have started shaping their eyebrows into straight lines, just like most Korean women. In short, Hallyu, or the Korean Wave, has been transformed into a lifestyle.

Hallyu is not a new phenomenon. Even Cuba, for example, has been hit by the Korean Wave. In the socialist country, where only around 20 Korean residents live, Korean dramas have a huge following. The trend began when a Korean drama series, “Queen of Housewives” (2009), aired on Cuban TV in 2012. Since then, the popularity of Korean dramas has begun to surpass that of Hollywood TV and movies by far, as shown by DVD sales.

In addition, more evidence of the global popularity of Korean culture can be found in KCON 2015, which took place in Los Angeles in early August.

It hasn’t been long since the Korean Wave was first recognized in the late 1990s. Since then, the trend has spread from music and dramas to other sectors, including fashion, food and beauty. 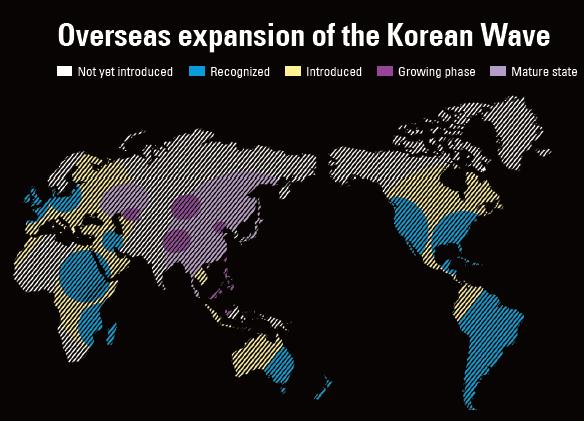 At the Milan Expo 2015, for example, Korean food received a warm welcome, with the line of people waiting to try the Korean delicacies on offer the longest at the event.

Although Korean culture has already succeeded in gaining attention worldwide, for the businesses involved it is still important to constantly consider ways to develop and further expand on Hallyu.

Experts claim that there are three methods to further promote Hallyu. First, the Korean Wave needs to work as a catalyst to enhance Korean brands. Second, the Korean Wave should be understood as a global industrial infrastructure. And lastly, Hallyu should grow into a medium for reviving Korean traditional culture in creative ways.

“Hallyu is an invisible expressway. We should now view the Korean Wave as an industrial infrastructure established in a global market,” explained Chae Ji-young, a researcher for the Korea Culture and Tourism Institute. 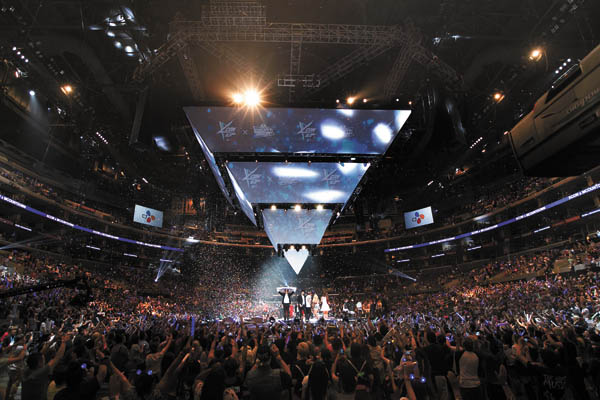 “The Korean Wave is able to contribute to enhancing the brand of Korea, ultimately playing an essential role in making Korea into one of the developed nations,” said Kim Soo-yi, a professor at Humanitas College, the liberal arts college at Kyung Hee University.

One example of the value of Hallyu for enhancing Korean brands can be seen in the case of hologram concerts.

In a dark theater, G-Dragon, the frontman of the popular boy group Big Bang, suddenly appears on stage. The audience screams with excitement, saying repeatedly, “Is this real? It must be. It seems so real.”

Despite their excitement, however, the G-Dragon dancing and singing for the audience is merely a hologram. Such a hologram performance takes place almost every day at a digital theme park called Play Kpop, located in Seogwipo on Jeju Island.

“We built a performance hall in Beijing and Quzhou in China and also exported the content,” said Lee Dong-hoon, the CEO of District Holdings, which specializes in holograms.

“Foreign fans will be able to see [K-pop star] hologram concerts in real time in their home countries, while singers are actually staging performances in Korea.”

Hologram concerts are the result of the combination of culture and cutting-edge technology.

In the past, Korea used to be one of the least developed countries in the world. However, thanks to growth in the manufacturing industries such as steel, shipbuilding and semiconductors, Korea developed rapidly. And this development will hopefully be maintained in part through so-called culture technology (CT), according to researcher Jung Ji-hong from the Korea Creative Content Agency.

“The growth engines of Korea in the next 50 years will be CT. And the combination of CT and information and communications technology will generate explosive value. In the era of fusion and convergence, the only blue ocean is the CT industry.”

In fact, CT has already progressed in various instances across Korea. A dancing Robot called UXA90, standing 90 centimeters (2.95 feet) tall and weighing 10 kilograms (22 pounds), for instance, can be found at the offices of Robo Builder in Sangam, western Seoul. The robot is able to dance along to the music of Psy’s “Gangnam Style” on its own. And it is also capable of imitating the dance moves of researcher Park Dong-ho, who wears a vest that contains 11 motion sensors to guide the robot.

Robo Builder’s achievements expanded further through a collaboration of SK Telecom, which is currently developing the next generation of communications technology, or 5G. Through collaboration between the two companies, it may become possible for robots to mimic the actions and feelings of people across great distances. The joint project could be highly useful across a range of industries, including medicine, education and disaster management, according to Robo Builder CEO Park Chang-bae.

Another example of unique Korean CT can be seen in the popular movie “The Admiral: Roaring Currents” (2014). In the past, Korean movie studios had to pay vast sums for foreign technologies in order to create the special effects for scenes featuring ocean waves.

But now, domestic companies have developed a similar technology, and have even begun exporting it and receiving foreign investment.

“It is crucial to concentrate on promoting the Korean CT industry to make it compatible with the Hollywood entertainment industry,” emphasized Prof. Park Jin-wan from Chung-Ang University’s Graduate School of Advanced Imaging Science.