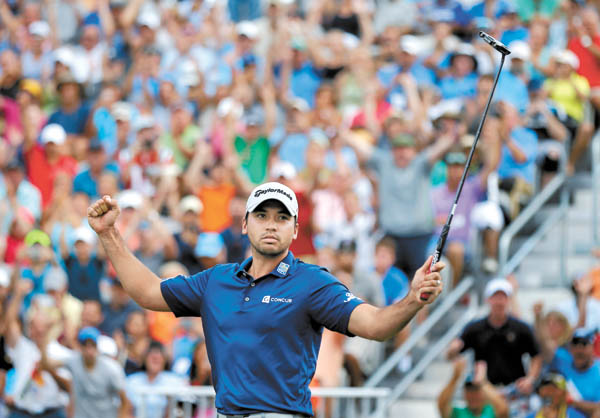 Jason Day celebrates after winning the Barclays golf tournament Sunday in Edison, N.J. He finished 19-under with a 261 total [AP/NEWSIS]

EDISON, N.J. - The toughest challenge Jason Day faced on Sunday at The Barclays was convincing his peers that golf really isn’t this easy. He’s just making it look that way.

Fresh off his first major at the PGA Championship, the 27-year-old Australian powered and putted his way to another blowout against a world-class field, capping off an explosive weekend at Plainfield with an 8-under 62
for a six-shot victory over Henrik
Stenson.

It was his third victory in his last four starts dating to another close call at the British Open, where he left a 30-foot birdie putt short on the final hole at St. Andrews and missed out on a playoff by one shot. In his mind, that’s where it all changed.

“Ever since then, I just felt a lot more calm on the golf course,’’ he said. “I felt like it was my time. Mentally I felt like, ‘You paid your dues, now it’s time to go out and win tournaments.’ I’m not going to say in the future it’s going to be like this all the time, because it’s very difficult to win.’’

Day shot 63-62 on the weekend and finished at 19-under 261. He won two weeks ago at Whistling Straits by three shots over Jordan Spieth with a record score to par at 20-under 268. And the week after St. Andrews, he won the Canadian Open by one shot over Bubba Watson at 17-under 271.

“Jason is full of confidence, just heating it up, making birdies,’’ said Stenson, who pulled within two shots at one point and closed with a 66. “It would have taken something really special to challenge him today the way he’s playing at the moment.’’

Watson, who birdied the 18th hole for a 69 to finish third, was standing on the 15th hole when he said he turned to caddie Ted Scott and told him, “I’m playing good the last few months, and Jason Day is playing a thousand times better.’’

The victory, his fourth on the PGA Tour this year, moved him to No. 1 in the FedEx Cup and assures that Day will be among the top five who have a clear shot at the $10 million bonus at the Tour Championship.

More compelling is another race to No. 1.

Day remains at No. 3 in the world, but now enters the picture with Spieth and Rory McIlroy for golf supremacy. All three will have a mathematical chance to get to No. 1 at the Deutsche Bank Championship next week at the TPC Boston.

As long as he has dreamed of being No. 1, Day is trying to forget about it.

“Right now I’m trying to focus on getting some rest and going into next week, trying to play that golf course, which I absolutely love,’’ he said. “All positive stuff.’’

Stenson gave it a good shot.

He made birdies on the 13th and 14th holes to get within two shots, and Day hit a tee shot well to the right in the trees in the group behind on No. 13.

Day is in free flight, even though his week began with some doubt.

He was moving a box from under his motor home when he felt a twinge in his back, and Day pulled out of the pro-am to rest his back and have tests to check on the structural being of his back.

He still felt some pain on Thursday, but the heat helped over the weekend. And nothing was hotter than his putter. He began the back nine with a 30-foot birdie putt on No. 10 to keep his margin, and it never looked as though anyone else was going to win.

“It’s been a special summer for me, and it’s not over,’’ Day said. “To be able to play the way I did over the weekend is fantastic. Today was just phenomenal golf.’’