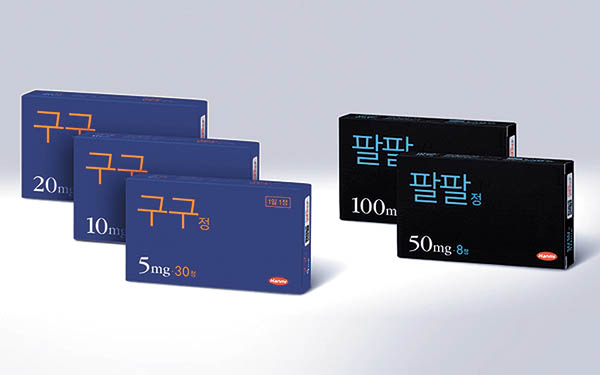 As the patent for erectile dysfunction drug Cialis expires in Korea today, an array of domestic pharmaceutical producers are scrambling to roll out cheaper generic alternatives.

According to the Korea FDA, some 150 products from 60 pharmaceutical companies have already received approval to produce generic versions of Cialis ahead of the patent expiration.

Seoul-based Hanmi Pharmaceutical is leading the way with its version, Gugu, which is expected to be launched on Friday. The new product will be available in water-soluble and chewable tablets with three dosages - 5 milligrams, 10 milligrams and 20 milligrams - and must be prescribed by a doctor.

“[The name] Gugu [the Korean pronunciation for 99] aims to stimulate associations with the age 99 and tautophony of ‘gu,’ which means old,” a Hanmi spokesman said.

When the patent for Viagra, from U.S. pharmaceutical giant Pfizer, expired in 2012, some 40 companies poured generic versions into the Korean market. Hanmi released Palpal, an adjective meaning active as well as the age 88. The brand has maintained the No. 1 position by sales among impotence-treating prescription generics in Korea ever since.

Hanmi has already unveiled a teaser advertisement for both Gugu and Palpal with a Korean catchphrase that means, “Be energetic until the age
of 99.”

Generic drugs refer to drug products comparable to a brand-listed drug product in dosage form, strength, quality, performance characteristics and intended use, according to the U.S. Food and Drug Administration.

Cialis, a brand from Indianapolis-based pharmaceutical company Lilly, sells at the highest price among all drugs treating erectile dysfunction. It comes in three dosages: 5 milligrams, 10 milligrams and 20 milligrams.

Pharmaceutical industry insiders speculate the prices for Cialis generics will range between 3,000 won and 5,000 won for 10 milligrams.

Viagra was the world’s first erectile dysfunction drug, approved by the U.S. FDA in March 1998. Cialis was approved in November 2003, and another such drug Levitra, from Germany’s Bayer, came three months earlier in August 2003. Levitra’s patent ends in 2023.

The key ingredient in Cialis is tadalafil, whereas Viagra mainly consists of sildenafil, and Levitra is based on vardenafil. The ingredients with the suffix “fil” refers to different types of Phosphodiesterase-5, or PDE5, inhibitors that help the body’s natural response to sexual stimulation.

The impotence drug market in Korea, including generics, was estimated at 100 billion won last year. Cialis had the largest piece of the pie with 28 billion won, followed by Hanmi’s Palpal at 18 billion won and Viagra at 13 billion won.

Among the three, Cialis boasts the fastest reaction, at 16 to 30 minutes from the point of intake, and the longest-lasting effect, between 24 and 36 hours.

“Previous users of Viagra easily migrated to generics, but Cialis had high customer loyalty,” said a spokeswoman from a local pharmaceutical company. “The marketing of Cialis generics won’t be that easy.”

Several other players have jumped onto the bandwagon of Cialis generics with creative names. Chong Kun Dan, the sixth-largest pharmaceutical company in Korea by revenue in the first half, is poised to release Cendom.

Other catchy names approved by the Korean FDA include Balgre, which means red but has the same pronunciation as the Korean word for erection; Taore, which suggests burning fire; Happylong; Endless; and Yesgra.