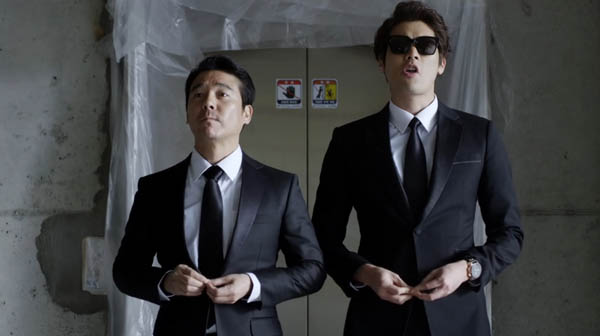 On the backs of a stellar cast including Hwang Jung-min, Yoo Ah-in, Oh Dal-su and Yoo Hae-jin, the film’s thrilling plot involving a ruthless business tycoon and a righteous cop is a major reason behind its success.

The fact that the antagonist’s reckless behavior, such as doing drugs, holding alcohol-fueled parties and shamelessly committing hit and runs, was inspired by real incidents from Korea’s conglomerate heirs attracted more attention to the film.

The second-place spot over the weekend was taken by romance flick “The Beauty Inside,” directed by Baek Jong-yeol.

In spite of its relatively toned-down ambience compared to other options in theaters, “The Beauty Inside” won the hearts of 20- and 30-something female viewers for its beautiful visuals and heart-rending love story.

It was watched by 401,808 moviegoers over the weekend, lifting its two-week total to 1.4 million, which roughly translates to 10.9 billion won.

Aside from the strong performances by actors Jun Ji-hyun, Lee Jung-jae and Ha Jung-woo, the film’s depiction of Korean independence fighters during the days of Japanese colonial rule aligned well with the nation’s mood, coinciding with the 70th anniversary of liberation from Japan.

Featuring two reckless cops hired to take down a vicious criminal in an “unlawful” way, this B movie-type film directed by Shin Dong-yeob reveals a side of Korean society where crime is necessary to get by.

“American Ultra,” an American action comedy starring Jesse Eisenberg and Kristen Stewart, who are both well-known in Korea, opened in sixth place with 91,083 ticket admissions.

Starring the duo as an unorthodox spy team, this film has now earned 1 billion won in Korean theaters.

French film “La Famille Belier,” based on a true story, opened in ninth with 36,125 tickets sold.