Women take to the stage in solo plays

Women take to the stage in solo plays 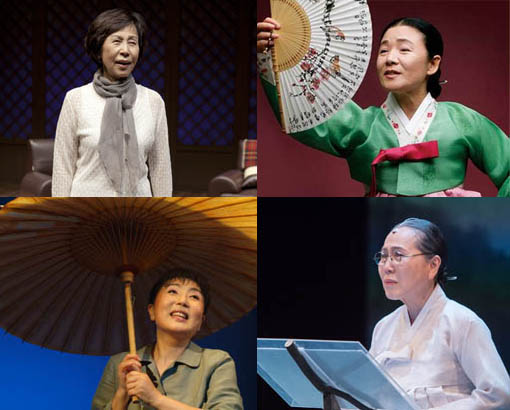 Four female heavyweights in Korea’s theater scene will be showing off their talent at the upcoming Namhansanseong Art Hall Monodrama Festival.

Son Sook, Ahn Sook-sun, Park Jeong-ja and Kim Seong-nyeo will each take center stage every weekend starting Sept. 4 at the festival at Namhansanseong Art Hall in Gwangju, Gyeonggi, about an hour-and-a-half drive from Seoul.

Sure, they might have some wrinkles and gray hair - all are in their mid-60s to early 70s - but with years of experience under their belts as actresses, they will play a mother, a daughter, a princess and more.

Kim Jeong-ok, the artistic director of the festival, said this is a rare opportunity for theater lovers in Korea. “We hope the festival can serve as a bridgehead for a new theater movement … which seeks diversification of traditional theater stages.”

It certainly is rare to see a gathering of such big names in the theater scene for a monodrama festival.

And the four actresses’ gigs all have distinct charms.

Son Sook’s monodrama is based on a novel by Park Wan-suh (1931-2011), an influential female author, about a mother grieving the death of her son. Park, whose son died at just 26 in a car accident, had said when she was alive that losing her son was the biggest sorrow she had to endure.

Meanwhile, Park Jeong-ja will play Queen Jeongsun (1440-1521), who led a tragic life. Her husband, King Danjong (1441-1457), died young and reigned for only four years, toppled in a coup by his uncle. But the couple, according to historical record, deeply cared for each other during their short-lived marriage.

Last but not least, Kim Seong-nyeo, the artistic director at the National Changgeuk Company of Korea, will present the highly acclaimed “The Fairy in the Wall.” The play is based on a story by Fukuda Yoshiyuki that was set in the Spanish Civil War, but it has been re-imagined with Korea after its liberation from Japan in 1945 as the backdrop.

The organizers hope to make the festival a global one starting next year by collaborating with the monodrama division of the International Theatre Institute.