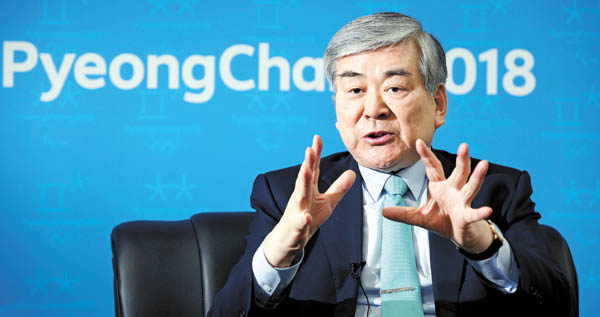 Cho Yang-ho, president of the 2018 PyeongChang Olympics’ Organizing Committee, talks to Kim Young-hie, a senior columnist of the JoongAng Ilbo, in an interview Aug. 21 at the office of the organizing committee in Seoul. By Kim Kyung-bin

Four years have passed since the eastern city of Pyeongchang won its bid to host the 2018 Winter Olympics. That victory thrilled the entire nation, coming as it did after two failed previous attempts.

The preparation process, however, has been troubled. After disagreements between the organizing committee and the host city, the International Olympics Committee (IOC) expressed serious concerns earlier this year that the city may not be able to solve budget problems and may not be ready in time.

With two years remaining, Kim Young-hie, a senior columnist at the JoongAng Ilbo met with Cho Yang-ho, chairman of Hanjin Group, who was appointed head of the organizing committee in July 2014, to ask how the preparations are coming along.

Construction of venues is “back on track,” Cho says, and financial problems are being addressed by planning the Olympics “as economically as possible.” 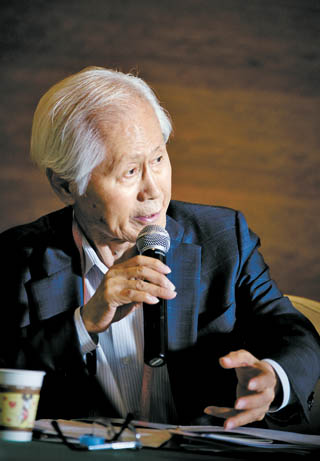 Kim Young-hie, a senior columnist of the JoongAng Ilbo

Q. Managing Korean Air, the nation’s biggest airline, should keep you busy enough. Why did you decide to accept the post as president of the 2018 PyeongChang Olympics’ organizing committee?

A. When I succeeded in winning the bid for Pyeongchang, I thought my job was done. I went back to my original occupation until I heard Kim Jin-sun had resigned from the presidential post. I refused the offer at first because I had my hands full at Hanjin Shipping. But the offer came again and they said there was no eligible candidate. Thinking that I should achieve a successful result, I accepted it with deep determination.

After Pyeongchang won the right to hold the 2018 Winter Olympics, the organizing committee experienced financial problems and delayed construction of venues. Why?

The problems emerged before I took the position, which I think is one of the reasons my predecessor resigned. I was up to my ears trying to resolve those issues for the past year. The conflicts were mostly because of political and regional reasons.

What do you mean by “regional”?

One of the biggest reasons we won the bid was a promise that we would hold a “compact” event. We emphasized that every game venue could be within 30 minutes of the athletes’ village. We weren’t thinking about dispersing the venues until “Agenda 2020” came up, which was about saving money by using existing facilities. However, the concept in Korea was a little different because we didn’t have existing facilities to hold winter games. So, for instance, if we were to hold an event in Muju in South Jeolla, we would have to build the venue from scratch. The intention was nice, but when I came into the position, it was already too late to implement the idea.

I heard that there was some tension between the organizing committee and the provincial government of Gangwon.

Venue construction is in the hands of the province while it is our job to efficiently operate and make sure the facilities fit the standards. Before I came in, I think there was some miscommunication between the two parties. It could be likened to the provincial government being the opposition party while the committee was the ruling party.

What have you achieved since you took the position?

At the time, the committee had lost a lot of confidence from the IOC because of the domestic issues regarding venue construction. People worried that it would end up being like Sochi. I had to find a shortcut to finish construction. I showed the finished venue to the project reviewers at the IOC committee and they were greatly satisfied. When Thomas Bach [the president of the IOC] visited Korea [on Aug. 19], he said that preparations are “back on track,” which shows that we have won back their confidence for sure.

What is the goal of the 2018 PyeongChang Winter Olympics?

Selling a certain number of tickets isn’t what we have in mind. We aim to develop Gangwon into a tourism-friendly region. It is our goal to put its name on the world tourism map.

Gangwon residents will have high expectations for the Olympics.

We have to work together. We have to collaborate in order to make tourists consider Gangwon a province qualified to hold such big games. This is impossible to achieve unless the local residents assist in the upgrade themselves.

Are the residents living up to your expectations?

They don’t understand it fully just yet and that is what we should work on over the following two years. I know exactly what I am doing because an airline company is all about service. I am going to fully use my own experience and knowledge to upgrade the region and rightfully serve the visitors coming there.

“Passion. Connected.” This is the slogan of the PyeongChang Winter Olympics. What does this mean?

It originates from “New Horizon,” a slogan we used when we were bidding for the games. Because winter sports aren’t as popular in Asian countries, we promised that we would open a new chapter by introducing various winter games to Asian sports fans by interconnecting the hidden meanings of the Ps, which are people, possibilities, peace and places.

As many people know, the 1988 Summer Olympics in Seoul contributed immensely in upgrading the image of Korea. Can we expect similar effects from 2018?

Aside from the games, Olympics are about introducing the host country. After the 1988 Olympics, we succeeded in overcoming Korea’s existing image as a war-devastated country, suffering from extreme poverty. Now, we have to think about how we can show ourselves as a developed country. We have to show how Korea has developed from the “Land of the Morning Calm” to “Dynamic Korea.”

Unlike the Summer Olympics, which take place in big cities, Winter Olympics are held in isolated mountainous areas. That would naturally deter many tourists from coming. How are you going to deal with this issue?

We are not going to settle with filling the seats with Koreans. Since Beijing succeeded in its bid to host the 2022 Winter Olympics, their interest in the event would naturally lead them to visit Korea and see the games. Also, when the high-speed train connecting Seoul and Pyeongchang finishes, it will only take an hour to get there. My recommendation is to stay in Seoul and go to Pyeongchang to see the games in the morning and come back at night. That would allow visitors to take in the urban beauty as well.

With Beijing hosting the 2022 Winter Olympics, it leaves the impression that Northeast Asia is sweeping the Olympic games. Tokyo will host the summer games in 2020. Is there any opposition from other regions?

Competition for the Summer Olympics is usually high, but that is not the case for the Winter Olympics. That is a more limited market.

Nonetheless, Beijing’s victory in holding the 2022 games should have a positive effect for Korea.

I wanted Beijing to win because we can then coordinate with each other. One of our biggest challenges now is training the steering committee because we don’t have pre-knowledge about snow sports. At the moment, we have scouted experts from abroad, but we are still lacking. It will be a similar case for China. We can cooperate in fostering the steering committee and by the time Beijing is preparing for the event, our agents can go over there as advisors.

The total budget for the PyeongChang Olympics is estimated to be about 14 trillion won ($11 billion) and the budget allotted to the Olympic Games itself is about 2.3 trillion won, which is not a small amount of money. Is there any way to reduce it?

The available budget for the committee is a little less than 2 trillion won. But this is not a large sum of money because of the estimation that was set up about 10 years ago when we did not know anything about winter sports. The increase in the budget occurred from updating the difference that came from actually preparing for the event. Nonetheless, we are determined to make this a cost-effective Olympics so we are planning to rent most of the equipment needed for the Olympics rather than buying it.

How many gold medals do you expect Korea to win?

As a matter of fact, we haven’t won any medals from snow sports. We have always achieved a lot from ice games but that too is in competition with Japan and China fiercely trailing us.

At the moment, Korea’s sports diplomacy is facing a crisis with Lee Kun-hee, one of two Koreans on the IOC, hospitalized with health problems. The tenure of the other member, Moon Dae-sung, the 2004 Olympic taekwondo champion and current lawmaker, also ends next year. Do you have any intention of running for the IOC?

It’s not something I can do just because I want to. But I do have the intention.