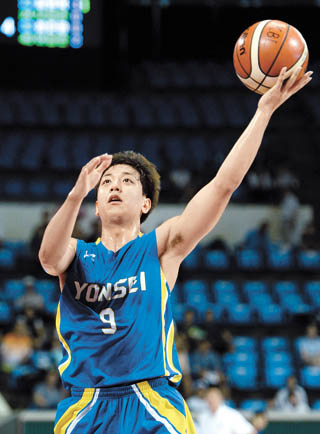 Yonsei University guard Heo Hoon goes for a layup against the Seoul SK Knights at the Pro-Amateur Basketball Championship, held at Jamsil Students’ Gymnasium in southern Seoul on Aug. 18. [NEWSIS]

The Pro-Amateur Basketball Championship last month ended with a victory for the Goyang Orions over Korea University.

The star of the tournament, however, was Yonsei University point guard Heo Hoon.

His school was beaten 79-78 by the defending Korea Basketball League (KBL) champions Ulsan Mobis Phoebus on Aug. 20 in the third round, but Heo stole the spotlight by collecting 23 points with eight rebounds and seven assists - all against Phoebus veteran point guard Yang Dong-geun, a three-time KBL MVP.

Heo’s performance wasn’t a one-off, either. In a game against the Seoul SK Knights on Aug. 18, Heo also bagged 25 points, five rebounds and seven assists.

As the sophomore excels on the court, local basketball fans have been saying, “Like father, like son.” Heo’s father is former Jeonju KCC Egis coach Heo Jae, who is regarded as one of Korea’s basketball legends - a versatile guard nicknamed the “basketball president.”

Heo’s older brother, Heo Ung, is also a guard now playing in the KBL for the Wonju Dongbu Promy. In an interview with Ilgan Sports, an affiliate of the Korea JoongAng Daily, last month, Heo Hoon, 20, talked about his journey in the Pro-Amateur Basketball Championship, as well as the comparisons with his father.

Q. Do you have any regrets about this tournament?

A. Both my personal and team record is a bit sad for me. In a game against the Mobis Phoebus, I didn’t play well in the third and fourth quarters compared to the first two quarters. In the fourth in particular, when my team was pressed, I should have made shots. I really wanted to beat Phoebus and go against Korea University in the semifinals.

What did you learn from the tournament?

I felt that I really needed to improve my stamina. Even my father pointed out that problem. In the third quarter against Phoebus, I even had a cramp on my leg. It’s rare for me to have a cramp since I started playing basketball. I couldn’t use my stamina wisely, as I was too nervous and played hard from the beginning.

How do you feel after going head-to-head against Yang Dong-geun, who is regarded as the best point guard in the KBL?

I was determined in the game to beat him because on the court, there were no senior or junior players. But as I played against him, I noticed he was a tough player to stop. Strength, game management and stamina - all were superb. Of course, I did learn something by facing these pro players. As I made shots, I gained confidence. If I face Yang next time, I can play better.

Your older brother, Heo Ung, is already in the KBL. What did he say to you?

Actually, he doesn’t talk much about pro life. Because of him, I was able to start playing basketball. In 2004, my father was in the United States for basketball, and my brother and I were also there.

In Korea, I usually played football, but in the United States, I was able to experience various sports like lacrosse, American football and basketball. My brother fell in love with basketball there. As I was used to playing football, I didn’t actually think about playing basketball, but since my brother started playing it, I played with him and it started from there.

Do you feel a lot of pressure on the court because you’re “Heo Jae’s son”?

From my childhood, I was always called Heo Jae’s son, so that’s familiar as my name. I felt no pressure to do well just because of my father.

I sometimes look at netizens’ online comments that criticize me, but I just laugh it off, thinking, ‘Maybe they’re just envious that I have a good father.’

Does your father teach you about basketball often?

He does give me advice frequently. But it’s more about mental things, not technical points. For instance, he told me stories that come from his experiences, saying I should be more ambitious in playing basketball.

It’s not exaggerating to say that my father didn’t coach me directly. From my childhood, I just watched my father teaching my older brother. For me, that kind of student-teacher relationship inside the family is awkward (laughs).

When do you feel like you have Heo Jae’s DNA inside of you?

Before I began to play basketball, I noticed that my muscles were not like others’. In the past, a trainer was surprised by looking at my body because it wasn’t a child’s body.

I think my muscles grow in five or six training sessions to a level it might take others 10 sessions to reach. My father also says that my body is like his. I’m thankful to my parents for giving me this good body.

Off the court, is it true that you talk a lot?

When I play basketball, I become a serious man with passion for victory. But off the court, I think I’m a rascal and talkative person. People even told me that if I had stopped talking, I should have grown further (laughs).

Are you worried about your height?

When my plays are not working well on the court, sometimes I think about my height. I’m currently 181 centimeters (6 feet) tall, but I think 186 centimeters is a good height to play basketball. But I also think this is an excuse. You can’t blame your height for not playing basketball well. Even if you’re short, you still got your height from your beloved parents. (Laughs.)

Do you have a girlfriend? What do you do in your free time?

I think this is the time to just focus on basketball. I like to get along with my teammates. If I have free time, I sometimes drink one glass of soju. Other than that, I go to my house and have dinner, which is always a joy because it’s difficult for us to gather around one table.

Are you thinking about turning professional early?

I want to go pro after I gain enough experience in college basketball. Now, I’m a rascal who kids around in the locker room, but I also think about taking on more of a leadership role as I become more senior.

I also dream of playing for the national team.

I want to be a player who is essential to the team. Before this tournament, I thought about how I could do well against professional players. The answer for me was to defend them as hard as I can.

In order for me to grow further, I think defense is important. Looking back, my father had fantastic plays, but he didn’t defend enough (laughs).

Do you want to be a player like your father?

I want to be the best player in this era. In my father’s era, a different style of basketball was played. Now, there are players like Yang Dong-geun. I have to overcome those kinds of players.