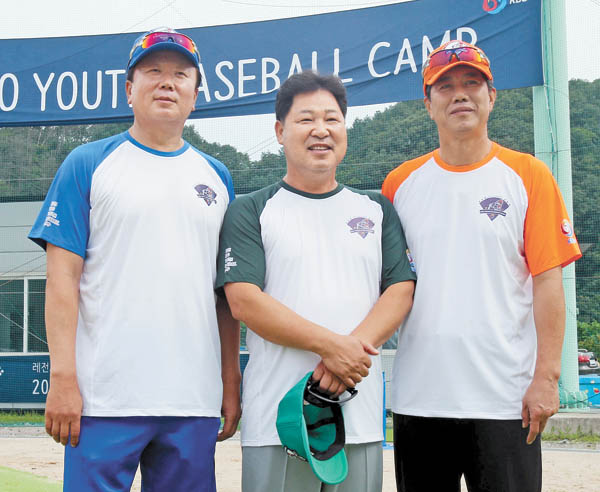 From left: Sun Dong-yol, Lee Man-soo and Kim Si-jin pose for a photo during the KBO Youth Baseball Camp at Godaesan Baseball Park in Yeoncheon, Gyeonggi on Aug.19. By Jung Si-chong

Eighty-five young baseball prospects from across the nation participated in the three-day camp two weeks ago at the Godaesan Baseball Park in Yeoncheon, Gyeonggi.

Both Kim and Sun were legendary pitchers in the KBO, while Lee was known as arguably one of the best power hitters in the league.

“It’s amazing to see managers I saw on television,” said 11-year-old pitcher Kim Kyung-seob of a Mapo little league team. “My dream is to become a professional player, and I want to be like Sun.”

Yang Hae-young, the KBO secretary general, said the organization is planning to open the camp regularly, as he believes youth baseball is the root of the pro league.

“It feels a little late, but we will develop this program more and make it into a regular program,” he said.

“We can hold the youth camp in the winter when Gocheok Dome is completed this year,” he said.

The event was the first time the three greats got together in front of the media. Coincidentally, all three quit coaching their teams last season.

Kim and Lee, who were both born in 1958, are known as the closest friends in Korean baseball. They both graduated from Daegu Sangwon High School and Hanyang University and spent their professional careers with the Samsung Lions.

“I knew through the media that I was getting traded,” Kim recalled. “I was so mad back then, I threw all my jerseys into the team’s office and stayed at a friend’s hotel.”

Although he feels the Lions treated him badly at the end, he said he has good memories of playing with Lee.

Lee’s position as catcher let him experience Kim’s dominant pitch in the 1980s. “His slider was superb,” Lee said of Kim. “Batters knew what was coming, but they couldn’t hit it. When he was achieving great results, I was happier than him.”

Responding to Lee’s praise, Kim waved his hand and gave a thumbs up to Sun. The 52-year-old is regarded as one of the best pitchers in the history of the KBO.

After making his pro debut with the Haitai Tigers (now the Kia Tigers) in 1985, he took six Korean Series titles and won MVP three times. The right-hander also holds the KBO’s all-time career record of lowest ERA at 1.20.

“My slider can’t be challenged against Sun’s,” Kim said. “When I first saw his pitch, I noticed that it wasn’t a joke. Our team always thought we should get runs before he appears on the mound.”

“I couldn’t hit his pitch,” said Lee, a three-time KBO home-run champion. “In his first year, I said to myself ,‘Where does this monster came from?’ He was really a monster.”

On the second day of the camp, the three greats took part in a ceremonial photo shoot.

As they gathered, Kim recalled the famous photo he took in the 1987 All-Star Game with late Lotte Giants pitcher Choi Dong-won, who passed away in 2011 from cancer at the age of 53.

Back then, Kim, Sun and Choi were regarded as the pitching troika of the KBO. The photo of the three pitchers remains one of the most popular images in baseball today.

“Choi was a better pitcher than me,” Sun said. “After I became pro, I worked hard to catch up to Choi because he was my idol. He is not in this world right now, but I can assure you he was the greatest pitcher.”

In the end, the trio tried to imitate the famous 1987 photo, with Lee taking Choi’s position. Kim jokingly asked the photographer to Photoshop the picture to make him look younger.

Almost 30 years since they played on the same ground, the legends looked forward to more meetings.

“Time really goes fast,” Lee said. “I really want to thank the two managers for joining this camp for three days. I really had a meaningful time, and I want to meet them frequently.”