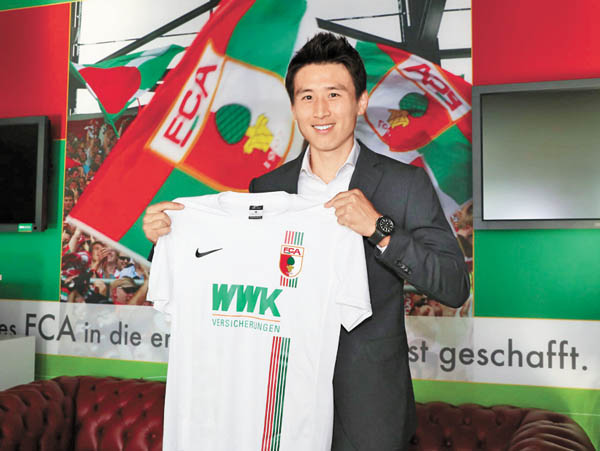 Koo back at Augsburg in €5m transfer deal

Koo Ja-cheol has sealed his move from Mainz 05 to FC Augsburg as the 26-year-old midfielder rejoins his former club in the German Bundesliga.

Augsburg announced on its website on Tuesday (Korean time) that Koo signed a two-year contract with an option to extend. His transfer fee is reportedly 5 million euros ($5.6 million), making him the club’s most expensive signing in its history. Koo also moved to Mainz 05 from Wolfsburg in Jan. 2014 for the same fee.

The former Jeju United midfielder previously played for Augsburg on loan from Wolfsburg in the second half of the 2011-12 season and the full 2012-13 season. Koo has scored eight goals in 36 matches with Augsburg.

He will join two other Koreans on FC Augsburg: forward Ji Dong-won and defender Hong Jeong-ho.

“I was always happy at Augsburg and now I have the feeling that I am coming home,” he was quoted saying on the club’s website. “It’s great that this transfer went through at such short notice. I would like to help the team reach our goals in the Bundesliga, the DFB-Pokal and the Europa League.”

Under-17 youth cup tournament kicks off

The 2015 Suwon Continental Cup Under-17 international youth football tournament kicks off today with four countries ahead of the upcoming FIFA U-17 World Cup in Chile next month.

The event was originally scheduled this June but was postponed to this month due to the Middle East respiratory syndrome outbreak. The tournament features U-17 teams from Korea, Brazil, Croatia and Nigeria.

Korea will first play against Nigeria tonight before facing Croatia on Friday and Brazil on Sunday. Coach Choi Jin-cheul called up FC Barcelona B team forward Lee Seung-woo and Jang Gyeol-hee, who is with FC Barcelona Juvenil A.

In the FIFA U-17 World Cup in Chile, Korea is paired with Brazil, England and Guinea in Group B.

Nishikori knocked out of U.S. Open in hours

A year after reaching his first Grand Slam final at the U.S. Open, Japan’s Kei Nishikori was eliminated a few hours into this year’s tournament.

Nishikori withdrew from the hard-court warm-up in Cincinnati because of a hip injury but said Saturday he was fine physically. On Monday though, he looked sluggish late in the match. Paire had never before defeated an opponent ranked in the top five.

Last year at Flushing Meadows, Nishikori became the first man from Asia to reach a Grand Slam final, where he lost to Marin Cilic. AP