At last, art fairs that anyone can afford

At last, art fairs that anyone can afford 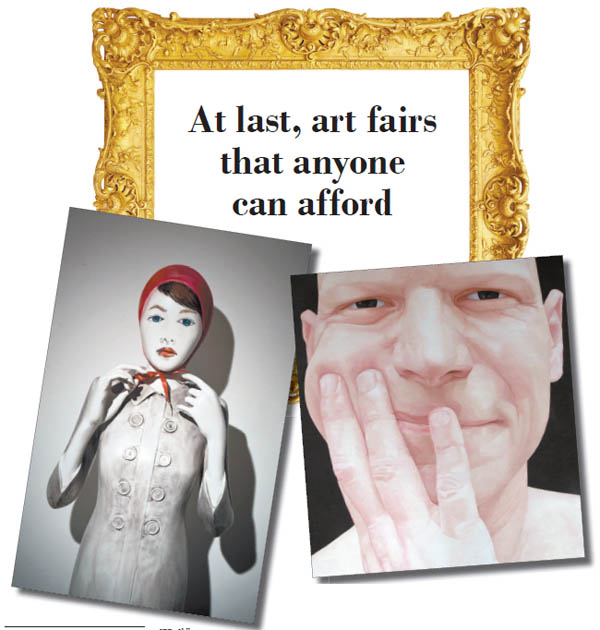 Some critics call art fairs “vanity fairs,” where rich collectors buy high-priced art pieces unattainable by ordinary people. But there are other types of art fairs. Two of such will take place in Seoul this month.

The Seoul Museum of Art (SeMA) has launched an “alternative art fair,” where artists can sell their works directly to collectors - not via galleries.

“The museum intends to provide a marketplace for artists alienated from commercial galleries and collectors,” explained Byun Ji-hye, SeMA curator. “This year’s event is a kind of pilot experiment. If it works, we will make it annual.”

The event, titled “SeMA Shot,” features about 120 works by 24 artists selected by outside curator Hong Kyoung-han. Many of the works carry strong political and social meanings, unlike the pieces commonly seen at general art fairs. For example, Roe Dong-shik’s installation work depicting a sinking ferry alludes to the 2014 Sewol ferry disaster and the surrounding controversy. And Byen Ung-pil’s portraits of people from different ethnic groups, but eliminating cultural symbols, question our ideas about ethnicity.

The London-based “Affordable Art Fair” is launching a Korean edition this month, offering art pieces for under 10 million won ($8,500).

The art fair was founded in London in 1999 by Will Ramsay to sell works by relatively unknown artists at affordable prices. The fair has now spread to 14 cities including Amsterdam, New York, Milan, Singapore and Hong Kong. According to operators, over 1.6 million people globally have visited an Affordable Art Fair, buying over 235 million pounds ($361 million) worth of art.

“A quarter of the purchasers in the London Affordable Art Fair are first-ever art purchasers,” said Kim Yulhee, director of the fair’s Seoul branch. “The fair operators expect a similar thing will happen in Seoul, whose art market they think has high potential.”

Forty local galleries and another 40 foreign galleries will participate in the fair, offering over 2,000 works.