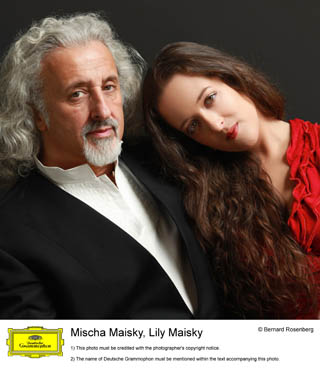 Today: Legendary cellist Mischa Maisky, loved by Korean audiences for his lyricism, will hold his 20th concert in Korea. He is known for his performance style, which combines poetic delicacy with great passion.

Maisky’s daughter Lily will accompany him on piano.

Saturday: Under the theme “Tale as Old as Time,” Disney will offer its magical world again with well-known music scores, including the music from “Frozen” and “Circle of Life” from “The Lion King.” Singer Yoonha will appear as a special guest to sing hit songs from “Frozen.”

SHOW ME THE MONEY 4

Saturday and Oct. 10: Feel the heat of one of the best hip-hop festivals in Korea. “Show Me the Money 4,” a TV audition program which discovers talented rappers, will hold two concerts, one in Seoul this week and one in Busan next month. The program’s seven producers will be the main performers, while the top four rappers are also preparing sets. Not only solo performances but also team sets will entertain the audience.

Sept. 12 and 13: B1A4, which has fascinated fans and audiences with a variety of different concepts at each concert, will hold a concert to show off the group’s new style. At an outdoor theater at Yonsei University, B1A4 will captivate the audience for hours with an interactive performance. The large stage and variety of settings will complement the band’s music for an unforgettable night.

Sept. 22: Bon Jovi is coming back to Korea after 20 years. With hit songs such as “Livin’ on a Prayer,” “Bad Medicine” and “It’s My Life,” Bon Jovi has amassed 130 million album sales and nearly 38 million concert attendees worldwide.