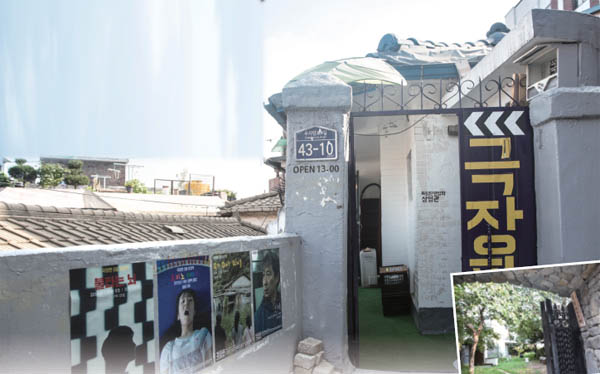 The Okin Theater in the Okin-dong area (below inset) and Geukjangpan in Usadan-gil both play short films only. Provided by Studio 706

The Okin-dong area in Jongno District and the Usadan-gil area in Itaewon are both known for trendy cafes and cute stores.
But recently, the two gained another common denominator.

The Okin Theater in Okin-dong and Geukjangpan in Usadan-gil both play short films only, while offering a cozy and homey atmosphere. In fact, people passing by might mistake them for just residences due to their humble and friendly exteriors.

Okin-dong is better known as Seochon, which means East Village, as it’s situated to the east of Gyeongbok Palace in central Seoul. 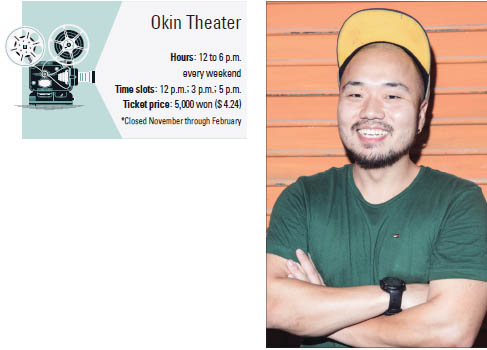 Kim Jong-wu, ‘We concluded that a movie theater would best make use of the space.’

It’s about a 10-minute walk from Gyeongbokgung Station on subway line No. 3, and it’s quite a pleasant walk, passing through Tongin Market, filled with interesting delicacies, as well as an artsy district.

The Okin Theater is nestled within a nondescript neighborhood with a small signboard hung on a telephone pole. It’s actually inside a two-story house with a small garden

The first story functions as a cafe. Even those who are not there to watch films can hang out in this space. The theater is in the next room, with an old-fashioned leather couch that accommodates just six people.

Visitors can enjoy cute little details inside the back room, like rows of video tapes that trigger nostalgia for the pre-digital era.

In fact, the theater was founded by five friends who grew up in the area and felt nostalgic for the old days. One of them is Kim Do-kyun, 33 years old, who grew up in this very house and today owns the property.

Left: Video tapes stacked at the back of the Okin Theater give a sense of nostalgia for days past. Right: At the Okin Theater, paying for a movie screening is not mandatory. The fee is rather considered a donation.

When Kim became an adult and went abroad to study, his parents moved elsewhere and the house was empty. When Kim came back, he and his friends altered the house here and there - mostly with their own hands - with hopes of transforming the place into some sort of cultural space.

“We also thought about making this place into an exhibition hall or a performance stage,” Kim Jong-wu, who took on the role of chief executive of the Okin Theather, said. “But we concluded that a movie theater would best make use of the given space.”

He added that they “wanted to play films that were good but can rarely be seen at commercial movie theaters.”

That’s how the five friends came to open the theater in March of 2013. Kim Jong-wu, who is also an installation artist, was in charge of planning and distribution, while other friends worked on public relations, maintenance and design, depending on their individual specialties.

Okin Theater is a nonprofit entity and not registered as a business. That’s why people don’t really have to pay the 5,000 won ($4.24) for tickets.

“It isn’t our goal to make a profit,” Kim said. “Originally, we operated the theater free-of-charge. But there were people who left in the middle of the movies. We’ve decided to charge them so that people would not underappreciate the movies.”

The theater, which operates only on the weekends, gets somewhere between five and 20 attendees per week who actually watch the movies. The overall number of visitors to the space, however, is countless, according to Kim.

In the early days, Kim chose which movies to play and contacted the directors and distributors to get the green light. But recently, they’ve been receiving applications from filmmakers wanting to screen their works.

It’s because all five friends who run the theater have professions of their own, including a journalist and a designer. In the case of Kim, whose interests include listening to and discussing underground music, he also operates a performance hall in Munrae-dong, Yeongdeungpo District, and does a podcast about movies and music.

Still, it is Kim who gives the final nod for special programs, and he says he considers completeness the most important criterion. Currently, the theater has organized a special showing of five films by director Choi Sin-chun. The program was the idea of Orange Film, a distributor specializing in short films.

Anyone interested in visiting should stop by the Okin Theater before the end of October, as it closes during the cold months from November to February.

“Because the house is quite old, heating is a problem,” Kim said. “It’s also quite costly, with the small ticket prices we charge. After all, Okin Theater is the most beautiful in the spring, summer and fall.”

Usadan-gil in Itaewon is an area best-known for its Islamic mosque. It’s in this hilly neighborhood where a navy gate, bearing the name Geukjangpan, can be found. 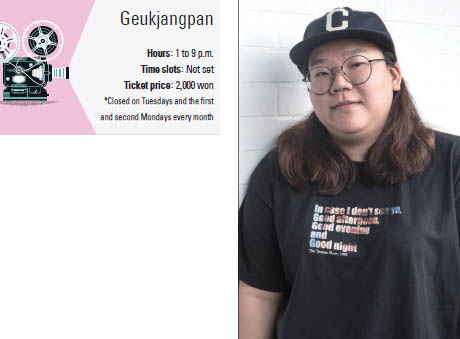 Once inside, the smell of scented candles is strong. The 50-square-meter space (538 square feet) also sells various candles along with unique postcards, jewelry and other accessories. The scented candles and postcards are the works of Kwon Da-som, the owner of the theater.

Geukjangpan in Korean means “the version released for theaters.” The 27-year-old owner said she wanted to show that short films can also be “suitable for theaters.”

What differentiates the theater from others the most is that it doesn’t have a set time schedule. People can choose from among three or so short films available each month and pay 2,000 won, and the theater will play it. It’s possible because the films’ running times are 20 minutes or so, at the longest.

The interior is quite welcoming, with six comfy leather chairs lined up. The large screen is connected to the home theater system Kwon’s parents own but never used.

Left: Kwon Da-som used the home theater system her parents owned to set up Geukjangpan. Right: Kwon also sells crafts and accessories she makes herself to make ends meet at the theater.

Unlike Kim Do-kyun from the Okin Theater, Kwon has a background in film: She studied film at the Seoul Institute of the Arts. Last August, she opened a movie theater in Incheon, with help from the Incheon city government’s programs for youth entrepreneurs.

“I always dreamed of opening a theater only for short films, which are often overlooked in the industry,” she said, adding that she actually sought the advice of Kim of Okin.

In January, she moved her theater to Seoul. While looking for a suitable location with cheap rent and plenty of people, she came across Usadan-gil.

“Areas like Hongdae and Gyeongridan-gil have seen young merchants, who actually made the areas trendy and popular in the first place, leave as rents soar,” she said. “But Usadan-gil has restrictions in place for remodeling, so at least for now rents won’t suddenly soar.”

Geukjangpan is registered as a retail business, with the profit mostly coming from selling Kwon’s wares. But of course, her heart is in film. She chooses the films the theater will play, sometimes attending independent film festivals to ask for the directors’ permission directly.

Every three months, Kwon receives applications from film students and directors who want to screen their works at Geukjangpan. So visitors can enjoy films that haven’t even debuted at film festivals. Among the four films at the theater this month is “On Our Way” (2014) by Kim Seon-wu.

“Even if you make a film, if it doesn’t make it through the competition and gets shown at film festivals you may never be able to showcase your film to the world,” 25-year-old Kim said. “In that sense, it’s a relief that there are places like Geukjangpan.”

Through word of mouth, the theater has gained traction. Between 15 and 50 people come per day. Visitor Sim Dae-hye says she likes the place because it doesn’t have long lines. “It’s also quite refreshing to see short films that you’ve never heard of before,” she added.

Kwon says that there is certainly demand for short films. She added that some people ask her what they can do to set up a theater like this.

Kim Hwa-beom, a distribution manager at Indiestory, a distributor specializing in independent films, said that in the past “there were not many places where people could get a unique experience [in terms of film] in the so-called hot spots like Seochon and Itaewon.”

“These theaters are suggesting a new business model where creators, distributors and theaters can collaborate,” he said.