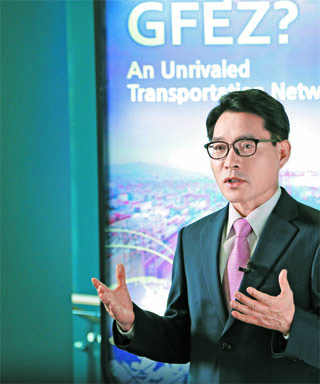 GWANGYANG, South Jeolla - Before it was designated as a free economic zone 12 years ago, this bay area was known for its scenery and seafood, and not much else.

The Gwangyang Bay Area Free Economic Zone’s impact on the economy is largely due to the traditional industrial facilities it houses: a chemical complex in Yeosu, as well as top steelmaker Posco’s mill in Gwangyang.

The zone is now taking another leap with the inauguration of Kwon Oh-bong as commissioner of the Gwangyang Bay Area Free Economic Zone Authority in July. Refusing to stay with sustainable but dated industries, the new head is taking a fresh approach to developing the coastal area that spans 19,203 acres.

The authority is paying particular attention to advanced industries and tourism, and the area’s major appeals for potential foreign investors are well-developed logistics and transportation networks and beautiful natural scenery, the new commissioner said as he sat down with the Korea JoongAng Daily in his office.

He has set up strategies to draw foreign investors by dividing teams within the authority by region: Japan, China and the West. The team dedicated to Japan will mainly deal with potential investors in biochemical and functional chemical materials, whereas the China team will focus on real estate, agricultural and fisheries investors. The West’s team is mainly focused on metal processing and carbon nano textile investors.

Kwon, 56, was born in Jangheung, South Jeolla. He received a bachelor’s degree in economics from Korea University and a master’s in economics from the University of Missouri, Columbia, and he joined the Ministry of Strategy and Finance in 1983. Since then, he’s been responsible for budgeting, industrial statistics, industrial trends and planning at various government bodies. He came to his hometown in 2013 as deputy governor of economics for South Jeolla and was inaugurated as head of the Gwangyang authority this July.


Q. What are the most appealing aspects of the Gwangyang zone for potential investors?

A. The area has served as a key pillar of Korean industrialization since the 1970s. The idea of developing the area was initially hatched by former President Park Chung Hee, and ever since, Posco has been operating its steel mill [in Gwangyang], and several conglomerates have been running oil and chemical facilities in Yeosu. In addition to cheaper land prices, the area’s strength also lies in its very convenient logistics. The Gwangyang port deals with the nation’s second-largest volume of goods transported next to the Busan port, thanks to nearby airports, railways and expressways. The area is surrounded by an outstanding natural environment and quality residential areas. We have reserved land specifically dedicated to education and medical institutions, which we believe will help lure foreign investors.

At what development stage is the tourism complex in Hwayang District?

Ilsang Ocean Development was initially named the exclusive developer of the land, but ever since it established The Ocean golf resort in the area in 2011, further development has stalled. We now plan to develop the remaining portion of the land, as Ilsang isn’t in such a good shape. I am sure the area has many attractive features to draw investors.

One of them is that the area neighboring the ocean in the far southwest of the Korean Peninsula is connected to islands with outstanding scenery. As soon as we finalize discussions and negotiations with Ilsang on the land development plan, we intend to recruit investors, through a bidding process, who are willing to develop the area into a comprehensive culture tourism complex by the end of this year at the latest. Nationalities don’t matter. But we think China is the most ideal candidate, given the high number of tourists from the nation.

We are open to a casino, given economic zones have relatively flexible regulations and requirements for running casinos. [North and South Jeolla are the only provinces in Korea that do not have a casino.] We also plan to obtain approval from the central government to launch an investment immigration program. [The investment immigration system is designed to attract foreign capital and businesspeople by giving investors the right of citizenship and residence.]


The Sepung Industrial Complex has recently passed the preliminary feasibility test by the Finance Ministry and the Ministry of Trade, Industry and Energy for establishing a smaller unit devoted to producing functional chemicals. How is the complex different from other existing complexes dedicated to chemical processing?

A chemical complex is no longer competitive enough, we thought. To add more value, we came up with the idea of attracting companies with expertise in more advanced functional chemical materials that have more growth potential. We won’t just stop with developing the materials but intend to attract R&D centers, as well as assessment and certification institutions. The latter two will save travel time and spending for companies operating here. [Companies in Korea currently rely on importing functional chemical materials, such as anodes for high-capacity lithium-ion batteries.]

The authority announced in June it is considering designating Sepung Industrial Complex as a foreign investment zone. What benefits would that entail?

The biggest benefit would be cheap rental fees. In a foreign investment zone, the central government purchases land and pays 60 percent of the price, and the local government takes responsibility for the remaining 40 percent. Foreign investors can then rent the land at a much lower cost, which will save them a sizable expenditure. 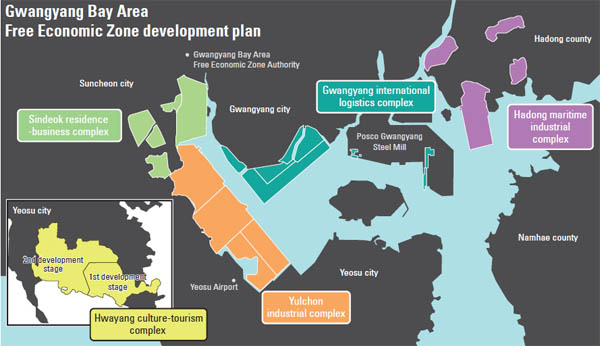 Have you hosted any investor relation (IR) sessions overseas yet?

My first destination since inauguration will be Shenyang and Jinan [in China] next week, mainly to attract investors for the Hwayang complex. Two more rounds of IR sessions are scheduled in China by the end of this year. The stock market in China that has soured recently is a little worrisome, but we are hopeful that those with a long-term perspective will be interested in investing. It may take a long time, and we are aware of that.

How is the project going to establish the first international campus of the University of Aberdeen inside the zone, in Hadong County, South Gyeongsang?

The Ministry of Education is in the final stage of issuing approval for the founding of the university. Campus construction is near completion and discussions about which faculty members to invite from Scotland are underway. The students will manly consist of workers at the nearby shipyard who wish to earn a master’s degree, or those who aim to be hired as shipbuilders after going through an undergraduate course.

[Under the agreement signed in March, the campus is set to become the first U.K. institution in Korea. It will specialize in offshore-related disciplines, including MSc courses in oil and gas topside engineering, subsea engineering and petroleum engineering and an MBA in energy management.]

Big things ahead for Jeolla zone

The Gwangyang zone has a total area of 77.71 square kilometers (19,203 acres) that extends between areas in two bordering provinces: Yeosu, Suncheon, Gwangyang in South Jeolla, and Hadong county in South Gyeongsang.

The zone consists of 21 smaller development units. Each unit has a specialized purpose, from the logistics and marine industry to residential housing, culture and tourism.

The Gwangyang Bay Area Free Economic Zone Authority, which governs the zone, says it plans to finish the development of 20 units by 2020.

Top development priorities for 2015 are the Sepung Industrial Complex, which produces functional chemical materials and bio-packaging, and the Hwayang District, which focuses on culture and tourism.

The authority initially planned to develop the complex all at once, but due to complications getting funding, it has now divided Sepung into two areas with different development timelines.

In the first stage, set for completion in 2020, the district plans to establish a complex dedicated to producing advanced materials, including functional chemicals and biochemicals.

The project developer will soon be chosen through a bidding process.

Meanwhile, Gwangyang aims to make use of its existing infrastructure to become a logistics hub.

The area already has a container terminal, hinterlands to the east and west and the Hwangeum Industrial Complex.

Gwangyang Port has the second-most port traffic in Korea and boasts a convenient transportation network. It is linked to four airports - Gwangju, Yeosu, Sacheon and Muan - all within an hour of the port, and is also connected to five highways leading to Seoul.

An extension of the KTX bullet train, completed in April, has made it possible to travel from Yeosu to Suncheon to Yongsan in central Seoul within three hours. When two local expressways centered around Hwayang District are completed by 2018, the district will be reachable in just 20 minutes from Yeosu airport, Yeosu Expo railway station or Yeosu port.