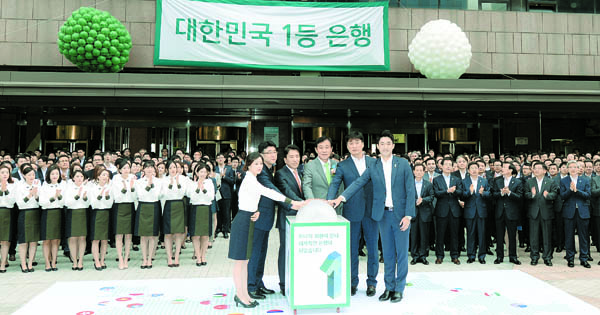 Korea Exchange Bank (KEB) and Hana Bank officially merged on Tuesday, in a deal that turned two of the industry’s smaller players into a financial juggernaut.

When it became the majority stakeholder, Hana Financial group initially announced the merger would take place in 2017.

“As you all well know, there were many obstacles in launching the merged KEB Hana Bank,” said Ham Young-joo, CEO of the new entity, at a ceremony held at the bank’s headquarters in central Seoul on Tuesday. 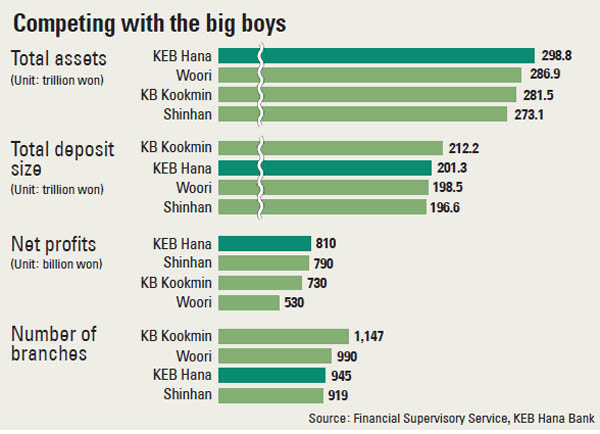 “Becoming a top-class bank means we will be a new bank, an innovative and high-tech bank. The next step will be becoming a global bank.”

The launch marks the end of an era for KEB, which has been in business since 1967.

But it also marks a new beginning for the bank, as well as a big change in the industry landscape. Before the merger, both KEB and Hana Bank were considered to be too small to compete with large institutions like Shinhan, KB Kookmin and Woori. Now, however, the newly merged entity is going head-to-head with its biggest competitors.

The bank can also now compete in terms of its sheer number of branches, which now number 945. The top spots are still taken by KB Kookmin Bank with 1,147 and Woori Bank with 990. However, KEB Hana Bank now pushes Shinhan, with 919 branches, to fourth place.

The merger is expected to generate more than 310 billion won annually in synergy. This includes cost-cutting from overlapping investments amounting to 269.2 trillion won, as well as 42.9 billion won in boosted profits.

But KEB Hana Bank’s new CEO is not just interested in expanding the institution’s size.

“Becoming a top-class bank doesn’t only mean size but also quality and content,” Ham said. “In other words, we will be the best in sales.”

Ham said he plans to enhance the salesmanship of every employee, which he hopes will translate into solidifying the bank’s customer base.

“It’s not easy [surviving] only with the existing system of profiting from the difference between deposits and loan interest,” Ham said. “We plan on solidifying and expanding our customer base while diversifying our profit sources with investment banking and foreign exchange businesses.”

He especially stressed that the bank will rearrange its corporate financing, which has largely been focused on major conglomerates, to increase loans for small and midsize companies.

But Ham said that to achieve the goal of truly becoming a leading bank in the local market, the ultimate factor will be securing harmony within the organization.

“We cannot generate synergy where there is conflict,” Ham said. “I myself come from Seoul Bank, which merged [into Hana Bank] 13 years ago.

“Through my experience, I have tried to think about the fastest way to achieve a complete merger, and the answer is harmony. We need to be accepting without discrimination. As a partner, I will make management and personnel shuffling transparent.”