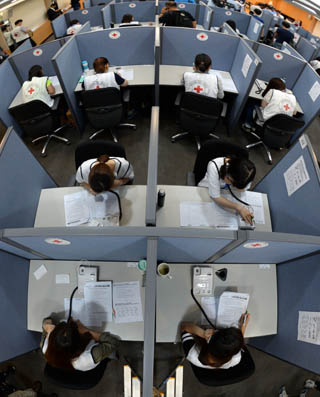 Consultants for the South Korean Red Cross make calls Tuesday to the some 66,000 people eligible to participate in family reunions to check their health and determine whether they are able to take part. [NEWSIS]

President Park Geun-hye on Tuesday expressed optimism that the six-point deal struck between North and South Korea earlier this month following a heightened standoff would “end the vicious cycle of tension” on the peninsula and “lay down the path for peace and reunification.”

“An agreement was struck last week following talks between high-level officials from both sides when national security and the safety of the people were at risk,” Park said in her first Cabinet meeting since the pact was drawn up.

She added that if the two sides deliver on each of the six points laid out in the agreement, recurrent tensions on the peninsula could cease and a thaw in inter-Korean relations could be achieved.

“If we succeed in delivering on our responsibilities, which were reached through hard effort, we can set out on a cooperative path toward reunification and put an end to this constant cycle of aggression that has lingered over the past 70 years,” the president said.

Park also touched on the highly anticipated reunions for the families separated by the 1950-53 Korean War, stressing the importance of their resumption for the 66,000 people in the South who were torn apart from their relatives during the conflict.

“Above all, I hope the talks concerning the reunions will proceed without trouble,” she said.

Reunions were last held in February 2014, the occurrence of which is generally seen as a positive indicator for the state of North-South relations.

The six-point agreement was produced after talks that lasted 43 hours, ending in the early morning hours on Aug. 25. The deal put a halt to the escalation of tensions that had brought the two sides to the brink of an armed conflict.

During a meeting last week with military and party officials in Pyongyang, Kim called the agreement “a crucial landmark occasion for defusing acute military tension and putting catastrophic inter-Korean relations on the track of reconciliation and trust.”

North Korea’s hope for an improvement in ties was also evidenced in its swift approval of working-level talks to discuss the resumption of reunions. The North’s OK came within 27 hours after the South first proposed talks.

On Tuesday, the South Korean Red Cross began making calls to the some 66,000 people eligible to participate in the reunions to check their health and determine whether they were able to take part.

The organization will have its first round of working-level talks with its North Korean counterpart on Monday at the Panmunjom truce village.

Though optimism for better inter-Korean relations has run high in recent days, concerns remain that these hopes could still be dashed in the coming months.

Park Sang-hak, a defector-turned-activist, announced that he would launch another round of helium-filled balloons containing leaflets critical of the regime on Thursday near the border.

The North has previously made clear its contempt for the leaflet-flying campaigns conducted by South Korean civic groups.

An official at the Ministry of Unification said the government would decide what to do about the scheduled event, taking into consideration the public’s right to freedom of expression and the government’s responsibility to protect civilians’ safety.

The official spoke on the condition of anonymity.

The Park government can technically deploy police forces to prevent the activists from launching the balloons, citing the dangers the campaign presents to the residents who live in villages along the border. The North has been known to fire anti-aircraft guns to shoot down the balloons.