Cho bucks trend of tall pitchers being ineffective in the KBO

Cho bucks trend of tall pitchers being ineffective in the KBO 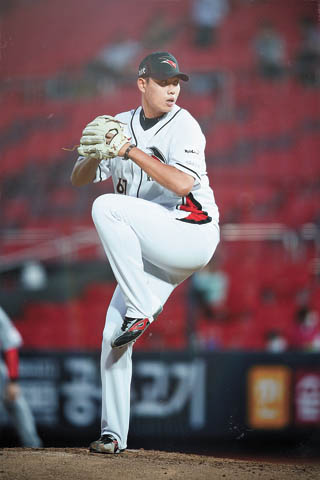 KT Wiz pitcher Cho Moo-keun throws against the Nexen Heroes in their KBO League game in Seoul on Aug.26 Provided by the club

KT Wiz pitcher Cho Moo-keun is often mistaken for a basketball player because of his height. The 24-year-old right-hander is 1.98 meters (6.5 feet) tall, making him the third-tallest player in the Korea Baseball Organization (KBO) this year, after Doosan Bears pitchers Dustin Nippert (2.03 meters) and Jang Min-ik (2.07 meters)

Cho, a rookie from Sungkyunkwan University, currently plays as a reliever. As of Wednesday, he is 7-3 with a 1.77 ERA in 34 games.

Cho was noticed for his height in college, but because his fastball speed was average - around 130 kilometers per hour (80 miles per hour) - he wasn’t a highly sought player. He joined the Wiz as the 54th draft pick.

But since joining the Suwon-based club, Cho’s fastball speed has jumped to nearly 150 kilometers per hour.

Tall pitchers like Cho have long been thought to have an advantage on the mound, but does height really make a difference? According to Chonnam National University Prof. Kim Young-kwan, who teaches sports science, the answer is absolutely.

“As the pitcher makes a longer stride, he increases his forward acceleration,” he said. “Since the baseball is going towards the batter, it’s important to maximize the power of that driving force.”

A longer stride also makes a batter feel that the fastball is actually getting faster because it reduces the distance between the pitcher and batter.

In the KBO, Cho extended his stride about 20 centimeters compared to his college days.

According to Kim, Cho’s height also helps explain the efficacy of his slider, which curves and drops near the plate. His height makes the angle of the drop sharper, but it also makes the pitch more powerful.

“If the pitcher is tall, that means he has longer arms and releases the ball from a higher point, maximizing potential energy,” Kim said. “If his arms are long, he can also get a bigger arc and more powerful rotation.”

Another key factor in Cho’s improvements is a change in training strategies. Cho now focuses on building a stronger core, which Prof. Kim says is critical to transferring energy into a pitch.

“A pitcher needs a connecting motion, which moves the energy created from the stride to the upper torso, which then shifts that power to the arm,” Kim said, “but to shift that energy, you also need to have strong core muscles in the abdomen and waist.”

Tall pitchers may have an objective advantage, but in Korea, they’ve rarely been successful. The Bears’ Jang, the tallest pitcher in the KBO right now, has a career ERA of over 9.60 since making his professional debut in 2010. Former Hanwha Eagles player Kim Joo, who is 2 meters tall, retired from the league after appearing in just three games with a 10.13 ERA, in 2009.

KBO history shows that a short height can be overcome through hard work. Legendary Lotte Giants pitcher Choi Dong-won, who passed away in 2011, was 1.79 meters tall, but with his unique pitching form, he remains one of the top pitchers in the KBO.

Former KIA Tigers manager Sun Dong-yol, who has the lowest career ERA in KBO history, was known for his long stride considering his height of 1.84 meters.

“Sun bulked up in his college days, which gave him stronger core muscles that allowed him to have a longer stride,” Kim said.