Taking souvenirs to the next level

Taking souvenirs to the next level 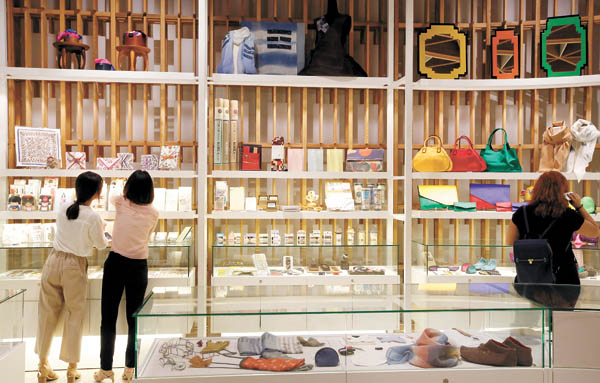 Visitors browse the new products on display at the souvenir shop inside the Blue House Sarangchae, a must-see tourist attraction located next to the presidential residence in central Seoul. The Korea Crafts and Design Foundation (KCDF) recently renovated the souvenir shop and reopened it to the public on Aug. 28. Provided by KCDF

One of the attractions for visitors to tourist sites like museums and galleries are the souvenir shops that appear at the end of the tour. Visitors can be mesmerized by the unique goods displayed and shoppers are bound to purchase an item or two to take home.

But until recently, this wasn’t the case at the Blue House Sarangchae, the visitor center for the presidential residence, which had an inferior souvenir shop.

Fortunately, the Korea Crafts and Design Foundation (KCDF) was selected to make over the store so that it “not only acts as a shop where people purchase goods ... but where visitors from all over the world can witness cultural products that showcase Korean crafts and design.”

According to the KCDF, about 2,500 people visit the Blue House every day on average, and among them 70 percent are foreigners.

“Therefore, it is significant that we properly and effectively promote Korea to these foreigners who are already visiting the country and have interest in Korea,” said KCDF Director Choi Jeong-cheol.

Instead of selling souvenir products with large logos of the Blue House, the KCDF opened the new souvenir shop on Aug. 28, that features diverse products in which “foreigners can witness Korea’s culture and tradition.”

About 1,000 products are on sale that are manufactured by 133 companies, including the winning entries from the annual “Korea Tourist Souvenir Contest.”

Organized by the Ministry of Culture, Sports and Tourism, the contest invites anyone who is interested in designing souvenirs to come up with an item that is irresistible to foreign tourists and that allows them to experience Korean culture. This year’s contest was the 18th edition of the event.

One item now on sale at the new Sarangchae souvenir shop is a two-coffee cup set by ceramic artist Yang Ji-woon priced at 55,000 won ($46). Yang is known for her handmade white ceramic tableware that features gold glitter. Her pieces were said to be especially popular at this year’s Milan Expo.

In continuing to developing contemporary crafts and design that exemplify Korean culture, the KCDF said it will make full use of space at Sarangchae to introduce high-quality products to foreign tourists while providing platform for local craftsmen and designers to develop, exhibit and sell their works.

The KCDF is currently holding a special exhibition titled “The Craft Makes Our Daily Living” at the exhibition hall located next to the souvenir shop in Sarangchae. There visitors can see historical Korean crafts and how they are being used today. The current exhibition ends on Sunday. Beginning Sept. 15, another special exhibition on Korean clothing and textiles over the course of the past 70 years will be available.

“From very old hanbok (traditional Korean clothing) worn by former presidents of Korea to the recent ones worn by President Park Geun-hye will be on display,” said Choi.

“The Blue House and Sarangchae have become a must-visit tourist attraction for foreigners visiting Korea,” said Choi. “It is our goal to make best use of the space available and try to promote Korea to foreigners who are already here.”

The KCDF is also planning to hold a hanbok fashion show on Oct. 9, which is Hangul Day, at Gyeongbok Palace in central Seoul.

“Gyeongbok Palace doesn’t open at night in October, but it will open on that day especially for the fashion show upon our request,” said Choi. “We are planning to open the event to about 2,000 foreigners visiting Korea.” 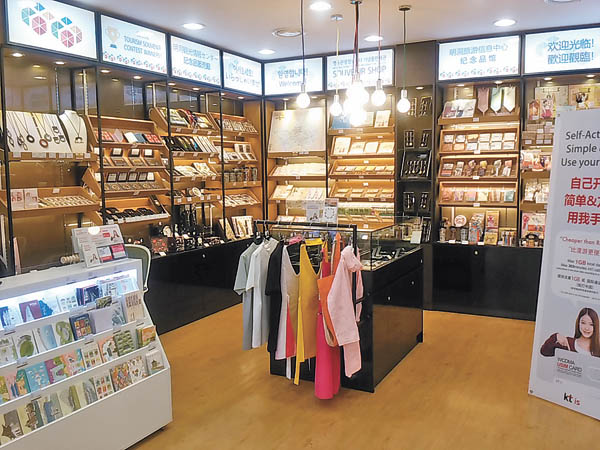 The souvenir shop at the Myeongdong Tourist Information Center in central Seoul is one of the popular shops among tourists. Provided by the center

Other shops in Seoul are upping their game

For tourists, souvenir shops are among the top must-see places. While some may enjoy looking for bargains at tiny stores in back alleys, many prefer the larger souvenir shops.

The Museum Shop inside the National Museum of Korea is one of the top destinations for souvenir shopping spots for its high-quality products ranging from folding fans to expensive crafts such as a mother-of-pearl jewelry boxes.

But not all souvenir shops have such attractive wares. Especially at souvenir shops operated by public institutions like the city government, the items for sale can look unappealing and out of date.

In an effort to promote Korea and the city of Seoul as a design mecca, the Seoul Metropolitan Government has been making efforts to restock souvenir shops across the city with the latest design products. Upon Mayor Park Won-soon’s request to come up with souvenir products with which foreigners can remember Seoul while learning the history and culture of the city at the same time, three years ago the Seoul government began to hold an annual tourist souvenir contest, separate from the national competition.

This year’s contest wrapped up last month, and the winning designs will go on sale in December at Seoul Design Foundation shops.

The foundation operates five stores: three at the Dongdaemun Design Plaza, one in Gwanghwamun and one at Incheon International Airport.

“As there are diverse visitors, it is not suitable for us to only focus on selling high-quality design and crafts products by artists,” said a foundation official. “We have products as low as 1,500 won [$1.30] to as high as 70,000 to 80,000 won, and they can also be considered high-quality design goods.”

Another souvenir shop inside the Myeongdong Tourist Information Center in central Seoul is also a popular stop for foreign tourists. It attracts about 300 visitors per day, of which 76 percent are foreigners.

In an effort to appeal to foreigners with products that show the beauty of Korea, an official from the center said the center carefully selected products to carry.

“We sell the winning products from the annual tourism souvenir contest organized by the Seoul city government, and we also cooperate with artists who work in the field of crafts and design to continue catering to the needs of the tourists visiting our center,” said the official.

The souvenir shop inside Seoul City Hall is currently undergoing a renovation and is slated to reopen on Sept. 17.