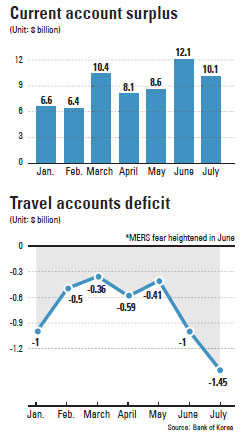 Korea posted a current account surplus of $10.1 billion in July, maintaining the longest streak ever for 41 consecutive months.

While the country is continuing to see surpluses, however, declines in both exports and imports indicated the economy was in a slowdown phase.

The goods account surplus narrowed to $10.9 billion from $13.14 billion recorded in June, while goods exports, at $48.2 billion, were down from the previous month’s $49.2 billion. Goods imports were down even more significantly, falling 20.6 percent to $37.4 billion from $47 billion a year ago at the same time. This makes the July goods surplus $10.9 billion.

“Falls in commodities prices and a slowing demand overseas, including those from China, have had negative effects on exports,” said Hwang Sang-pil, an official at the Bank of Korea.

July’s current account surplus was down by $2 billion from June’s $12.1 billion, but it was still up from the previous year’s $7.9 billion.

“Although the [Middle East respiratory syndrome] situation has been resolved, foreign tourist inflow has still slowed significantly, and this has increased the travel account deficit,” Hwang added.

Analysts said the so-called “recessionary current account surplus,” where a surplus is made due to bigger falls in imports than those of exports, will likely persist for some time as the global economic outlook, particularly the regional economy, still remains worrisome. The primary income account surplus narrowed to $1.28 billion from June’s $1.68 billion due to a decrease in income from the equity account.

The financial account recorded a net outflow of $10.64 billion, increasing slightly from $10.5 billion a month before.