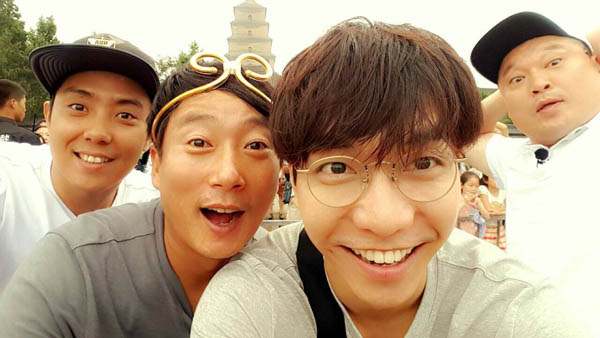 Aiming to provide a splash of joy in the midst of hectic daily life, star producer Na Young-suk has come up with a whole new format of variety show.

Instead of airing as one-hour episodes on TV, Na’s upcoming show, “New Journey to the West,” will be available to the audience solely through web portals. Each uploaded video will last no longer than 10 minutes.

This is the first project from “tvN Go,” a digital-content brand from cable channel tvN.

“Our motto is to make content that can provide joy to people for at least five minutes per day when commuting on buses and subways” said Na at a press event Tuesday in western Seoul.

“People can pick and choose what they want to see from the list, but will still be able to understand the content because each clip will have a beginning and an end within it” he added.

“There was no step-by-step casting process, but it all just happened very naturally when Lee Seung-gi mentioned going on a trip with the old members over a casual dinner,” Na explained. “We then talked about filming it, but because it would lack completeness as a TV show, we decided to use the Internet platform.”

The reunion was a mind-blowing experience for the actors as well.

“Reuniting with the old members for the first time in five years was exciting enough just by itself,” said the youngest cast member, Lee Seung-gi. “The chemistry was so good that I didn’t even have to think about how I should talk or do something in order to generate laughter.”

Lee Soo-geun, who has been keeping a low profile since an illegal gambling charge in 2013, said he will make up for past wrongdoings by doing his best in the new project.

In the upcoming show, the quartet of actors and Na will travel to Xi’an, which used to be the capital of China during the Tang Dynasty.

The plot will roughly follow the story of the 16th-century Chinese classic “Journey to the West,” with each actor taking on the role of one of the novel’s four main characters.

The unprecedented plan to distribute a variety show through the Internet provides freedom from certain restrictions, notably a ban on indirect advertising of certain brands.

“In the past, we were obliged to cover up brand names that appear in the show,” Eun said. “But now that we don’t have to care about it anymore, we can act way more naturally.”

In the newly released trailer, the cast members mention the brand names of chicken eateries without hesitation.

However, Na pointed out that the new platform will not lead to a fundamental change in the meaning of variety show.

“Of course, there will be brand names mentioned and some unfiltered scenes, but that should be no more than the show’s seasonings,” Na said. “Although the platform has changed, I still think that the show has to have the meaning of a variety show for the audience. It means that not as many things have changed as many people expect.”

The first episode, which will be divided into five clips of five to 10 minutes in length, will be uploaded this Friday at 10 a.m. on Naver TV Cast and Chinese portal site QQ.com.

Na said he picked the specific time slot because an official from Naver recommended it, saying “office workers will watch it during their lunchtime.”

The date and time for the second episode have not been confirmed yet.