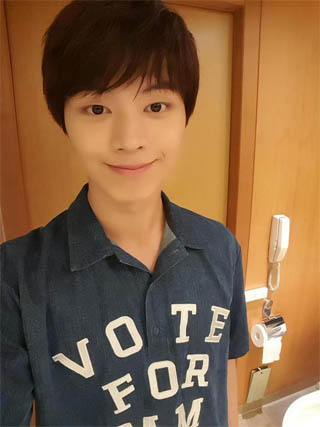 Singer-actor Yook Sung-jae from the boy group BTOB has been confirmed to be starring in the upcoming SBS drama series “The Town,” in which actress Moon Geun-young will also appear.

The 20-year-old expressed his reaction through his talent agency, Cube Entertainment, on Wednesday, saying, “I’m greatly honored to become a main cast member in the drama series airing on Wednesday and Thursday.

“I was actually quite cautious in taking part in the project. I will try my best not to pose any negative influence on participating senior actors, including actress Moon Geun-young.”

Yook debuted in the entertainment industry as a member of BTOB in 2012 with the digital single “Insane.” He extended his career to acting by taking on a minor role in tvN’s hit drama “Reply 1994” in 2013. He then went on to star in the lead role of “Plus Nine Boys” in 2014 and “Who Are You: School 2015” this year.

In the upcoming drama, the celebrity will take on the role of a policeman who plays a major role in solving a mysterious case that unfolds. The series is slated to air in October as a follow-up to “Yong Pal Yi.”