Facial recognition may be the key to home security

Facial recognition may be the key to home security 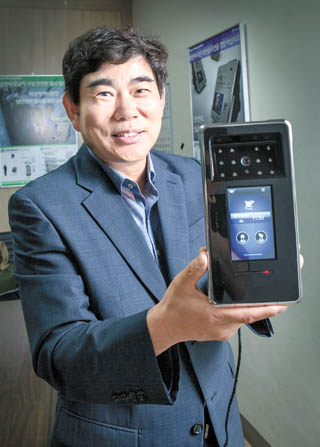 While advances in technology touch upon a whole range of sectors, the simple process of unlocking a door hasn’t attracted much innovation. Today, nearly all homes have nothing more than either a keypad or a basic key-based door lock.

The next new wave of home security, however, involves facial recognition because it is safer and more convenient than keys or a password system, says Jeong Gyu-taek, founder and CEO of FiveGT.

The facial recognition solutions company is one of the few local companies in the country that develops a biometric home security device.

The system is simple. When registered people approach the door lock, it can detect the person and open the door within seconds.

Jeong’s system uses an infrared camera to match the face of whoever is entering the premises with a facial image that has previously been stored in the system’s database.

The infrared-based system is independent of lighting conditions, as the sensors embedded in the system capture the heat pattern emitted by the face. “Different objects emit different ranges of infrared energy,” the 53-year-old CEO said. “So, even if a thief puts a photo of registered people over the device, the door won’t open.”

He said that the facial recognition system would be particularly useful for a household with older people. “[Old people] typically have a hard time memorizing four to six digit numbers,” he said.

“It becomes worse when people are encouraged to regularly change the password for security reasons.”

The management of the system runs on the Android operating system, which allows people to control access points, receive alerts and control the system through a smartphone app.

When a stranger approaches the door, a photo of the person could be sent to the householder.

But Jeong hopes that the system will be more than a mere security system.

The locks also allow people to send voice messages that can be played when the door opens.

The function may help family communication, Jeong said. “Conversations among family members have become few and far between in modern society,” he said. “So, if a father who returning home late because of a heavy workload hears the voices of his children as soon as he enters the home, it would be really great.”

Although the cutting-edge security system is not widely used, the company says it has landed contracts with new villas and apartment complexes in affluent areas.

“Since it costs around 2 million won ($1,692), it is still not easy for many households to buy one,” he said. “But if they see the advanced functions built into the system at the apartment complexes, they are likely to be attracted.”

The CEO said FiveGT has signed or has worked on a memorandum of understanding with builders in Saudi Arabia, Oman and Malaysia to supply the system.

The company has worked with security firm ADT Caps and mobile carrier KT to integrate the biometric system into their security systems.

Most recently, FiveGT formed a partnership with KEB Hana Bank to develop an ATM machine with facial recognition technology.