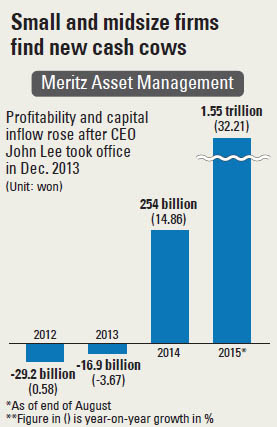 When 70-year-old Ms. Lee purchased a building last year worth about 6 billion won ($5.1 million) near Gwangjang Market, northeastern Seoul, she used a securities firm rather than a real estate agency.

Shinyoung Securities not only planned the financing of the deal, but also found the building itself.

In exchange, the firm received a commission on the sale.

Shinyoung Securities and Kiwoom Securities, which are ranked 11th and 12th by size in the nation’s brokerage market, are the only two firms that obtained the licenses.

Small and midsize firms like these are boosting profitability by diversifying their business portfolios and bringing innovative people into their organizations.

Niche markets like real-estate consulting have traditionally been disregarded by securities firms, but have recently become new survival strategies for the small and midsize companies in the local finance industry, which is saturated with 56 brokerage firms and 87 asset management firms.

As Korean stock markets haven’t seen either dramatic jumps or plunges in the past few years, many large-size firms have taken operating losses.

But Shinyoung, the first player in the industry to diversify its portfolio, has managed to record operating profits for the past 44 consecutive years. 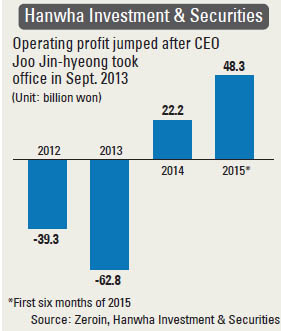 When the company last reported in in 2013, its net profits stood at 40.8 billion won.

Shinyoung’s recipe for success was a focus on asset management services, whereas other big-name brokerages sought only to profit from entrusted stock trades.

“Ever since Shinyoung first launched asset management service in 2002, the total assets our clients deposited tripled, but the total size of financial services grew by 9.9 times in the same period,” said Jeon Ik-soo, head of the firm’s individual client business department.

Last year, revenue from entrusted stock trades accounted for only 11 percent of the firm’s operating profit.

The selling of financial services, on the other hand, accounted for 20 percent of operating profit.

Hanwha Investment & Securities, the industry’s 14th-largest player, is experimenting with expanding the numbers of analyst reports that focus on which stocks should be sold.

Hanwha Securities’ CEO Joo Jin-hyeong is at the center of this change. Joo has continuously criticized on social media the industry’s practice of publishing corporate analysis reports that say which stocks to buy, rather than which stocks should be sold.

At a shareholders’ meeting in March, Joo announced that the firm will expand the number of selling recommendation reports published, to 16 percent of the total, to provide more accurate and objective investment information to customers.

“I hope to reform our research center first to disseminate real investment information, so that institutional and pension funds can trust us and entrust us with their money.”

As part of the initiative, Hanwha is also offering investment assessments on some 800 listed companies with market capitalization of 100 billion won or more, giving them a grade on investment suitability between A and F. An A or B means the company has a bright future ahead, while a C grade indicates a neutral assessment.

Grades of either D or F mean that investors should refrain from buying the stock.

Hanwha also slimmed down its fund products from 400 in 2013 to 60, and started giving them grades. The firm picks 30 long-term funds as its best performers and emphasizes them to its clients.

With such reforms, Hanwha posted an operating profit of 22.2 billion won last year.

“In the first half of this year, we’ve seen an operating profit of 48.3 billion won.”

Another innovative firm has been Meritz Asset Management, thanks to CEO John Lee, who took office in December 2013 and made big changes to the work environment.

According to fund assessment firm Zeroin, Meritz’ profitability was the lowest in the local industry back in 2013, at minus 3.67 percent. Meritz was also seeing capital outflow of 16.9 billion won.

But within a year of Lee taking office, the firm saw profitability hit 14.86 percent, the second-highest in the industry, and also saw capital inflow of 254 billion won.

One of Lee’s biggest changes was eliminating the company’s communications policy, which forced workers of lower rank to only communicate with their superiors via formal document.

Instead, he made it possible for workers across all ranks to communicate via email, and even encouraged workers to contact him directly.

Lee also made all working hours flexible, and eliminated the after-work gatherings that employees are usually required to attend.

The CEO then encouraged fund managers to write management reports as though they were writing a letter, and the reports are now well-known for their clarity and readability.

“To satisfy our clients, we have to generate profits for them,” said Lee. “To generate the profits, our employees should work freely under their own philosophy, not always being so self-conscious around their senior workers.

“All industries should change in this way.”