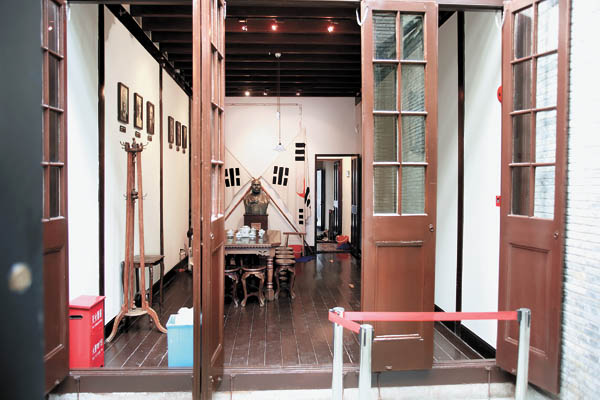 The bust of iconic Korean independence fighter Kim Koo was moved to the first floor inside the memorial of the Republic of Korea’s Provisional Government, which reopens Friday in Shanghai, China. By Jang Chang-gwan

China will display a newspaper editorial contributed by iconic Korean independence fighter Kim Koo at the memorial of the Republic of Korea’s Provisional Government, which reopens this week, sources close to the Park Geun-hye government told the JoongAng Ilbo on Tuesday.

President Park will attend the memorial’s reopening ceremony tomorrow as a part of her three-day trip to China. After spending her first two days in Beijing to meet with Chinese leaders and attend events to mark the 70th anniversary of the end of World War II, Park will visit Shanghai, where she will attend the reopening as well as a business forum.

According to the source, the Chinese government paid particularly special attention to the memorial’s main exhibition hall. A bust sculpture of Kim and a large Korean flag stand in the central hall. Before the memorial was refurbished, the sculpture was displayed inside a theater on the ground floor.

China paid all the expenses necessary to renovate the building.

“The Chinese government has prepared a special reopening ceremony, having sent out invitations from the beginning of this year to the descendants of the officials who served in the provisional government,” a government official told the JoongAng Ilbo.

Among those invited to the reopening ceremony is Kim Yang, the former head of the Ministry of Patriots and Veterans Affairs, and the grandson of Kim Koo.

Kim, also known by his pen name Baekbeom, was the sixth and the last premier of the provisional government of the Republic of Korea. He was also a leader in the Korean independence movement against Japanese colonial rule.

In 1919, Kim exiled himself to Shanghai after the March 1st independence movement in Korea and joined the provisional government.

He was integral in forming the Korean Patriotic Corps, a group of independence fighters whose members included Yun Bong-gil, who assassinated Japanese military leaders in Shanghai in 1932.

Earlier in the year, Lee Bong-chang, another member, attempted to assassinate Japanese Emperor Hirohito in Tokyo with an explosive, but his mission failed.

Kim returned to Korea following Japan’s surrender in World War II, but was assassinated on June 26, 1949.

He wrote the editorial to be unveiled this week, entitled, “China’s resistance and Korea’s independence,” for China’s Xinhua Daily. It was published on Oct. 7, 1943.

The daily was the first public newspaper published in the People’s Republic of China by the Communist Party of China.

According to the source, China received from Korea most of the records and materials to be exhibited at the Korean provisional government building, but prepared this particular piece on its own. The opinion piece was never before unveiled in Korea.

A government official told the JoongAng Ilbo that Kim’s editorial expanded on the meaning behind the movement to fight Japanese aggression as well as his expectations for it.

“The Chinese government appeared to have made a decision to display it as a centerpiece to stress that the provisional government of Korea and the Communist Party of China had fought against Japan together,” the official said. “And it appears to be an attempt to link that historical fact with current Korea-China relations.”

Kim contributed an opinion piece under the same title to the Xinhua Daily in July 1944. In it, he wrote, “The Korean provisional government is receiving assistance from China’s party, government and military.

“Close cooperation between the people of Korea and China will surely lead to the defeat of the ‘Japanese robbers;’ and I have no doubt that we can thoroughly accomplish our goals of China’s victory in its war against Japan and Korea’s independence.”

Experts say China’s attempt to highlight this aspect of history is part of a public diplomatic display by Beijing to expand consensus between Korea and China.

“It’s a part of a diplomatic effort to more closely adhere to Korea in this complicated situation that is Northeast Asia,” said Professor Kim Heung-gyu, director of the Chinese Policy Research Institute at Ajou University.