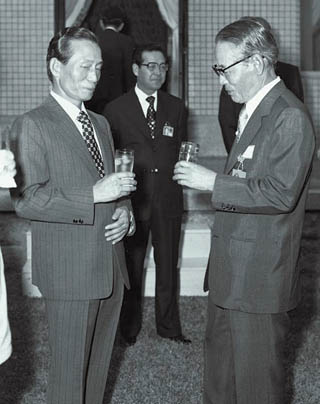 President Park Chung Hee, left, talks with Samsung Group Chairman Lee Byung-chull, right, at the Blue House on May 29, 1975. Park threw a cocktail party that day at the Blue House for businessmen who made donations to national defense, where he also requested they keep up exports despite suffering losses. Provided by Kim Jong-pil

South Korea was so poor that it had to depend on the United States and people almost gave up on trying to solve the poverty issue. Back then, there was a saying: “Even a king can’t save [a nation from] 5,000 years of poverty.”

When we started the May 16 revolution in 1961, our goal was to raise a poor South Korea into a free country where the people weren’t starving anymore.

But this country, which has experienced such severe poverty, now has the world’s 11th-largest economy.

It’s the older generation who worked so hard to make this country an economic success. If I should pick the biggest contributors, I usually credit the late Samsung Group Chairman Lee Byung-chull (1910-1987) and late Hyundai Group Chairman Chung Ju-yung (1915-2001).

These two businessmen had totally different personalities. Lee was a person who strove for the best results once he set out on doing something.

On the other hand, Chung was willing to take big risks once he was onto something. I can’t determine who was better as a businessman, and I believe both made huge contributions to Korea’s economy.

Lee fully researched his projects from start to finish. He looked into every aspect in detail and even asked for opinions from Chairman Yoshihiro Inayama of the Japanese Business Federation. Then he would decide whether to start a new project.

At the end of 1967, President Park Chung Hee, who at the time was interested in the heavy chemical industry, told me: “Tell Chairman Lee Byung-chul to start a heavy chemical project.”

When I met with Lee and delivered the message, Lee mulled over the idea for a while and then said, “Let’s go see the president.”

Lee and I went to the Blue House, where Park asked again, “Why don’t you start a heavy chemical business?”

“What do you mean by a heavy chemical industry?” the businessman replied.

“I recommend you choose either shipbuilding, cars or electronics,” the president said.

So Lee chose electronics, a project that went on to become Samsung Electronics.

The first Samsung Electronics factory was built in Suwon. Escorting me around the TV and radio production lines of the factory, Lee vowed, “I’ll put my all into this.”

“I know you wouldn’t do something if it weren’t best for the country,” I responded. “You can do it.”

Today, the company is renowned worldwide for its semiconductors.

Later, in 1971, when I served as prime minister, Lee came to my office.

“I’m starting a new project,” he said, “and I think Yongin, Gyeonggi, would be the perfect place for it. But I can’t buy it because part of the land is government-owned.”

He explained that he would like to build a theme park, like Tivoli Garden in Denmark or Disney Land in the United States. I liked the idea.

He requested that I convince the Korea Forest Service (KFS) to sell the land.

When I met the KFS director, he told me he couldn’t make the sale since one of the government’s major policies was afforestation. So I thought of another idea. “Why don’t you buy a plot double the size of the state-owned area and exchange it?” I suggested to Lee.

He accepted the offer and in the end managed to buy the land in Yongin. He built the Yongin Natural Park, the country’s first theme park, whose name was later changed to Everland.

Lee and I were quite close and were both members of Suyohoi, or the Wednesday Club, where we regularly played golf. His golf game reflected his personality: He used to hit the ball quite neatly.

He loved pine trees, too. He paid special attention to the pines along the golf course. We didn’t have skills to properly replant pine trees back then, so about 90 percent of the replanted pine trees died.

Lee went to Japan to learn replanting skills himself and taught me that pine tree roots should be covered with gunnies first and replanted once they recover. He put his heart into not just his business, but his hobbies as well.

Chung, on the other hand, was a man of big ideas and perseverance, and he didn’t stop at what he believed was plausible.

“Please help me in building a car made 100 percent in Korea,” he requested one day after visiting my office.

Since I had once failed to develop one, I welcomed the decision. But he could have reported the idea to the president through the Economic Planning Board. When I asked him about that, he said that the board and the Ministry of Commerce and Industry had rejected the proposal, claiming that Korea wouldn’t be able to export the car.

“The president is very interested in machine engineering,” I said. “Did you ask him about this?”

“I told him once, but he told me that everyone objected to the idea,” he said. “He’s not giving me a clear answer.”

Thinking that Park must have concerns, I brought Chung to the Blue House.

“Chairman Chung pulls off whatever he wants,” I told him. “Why don’t you give him a chance?”

But Park wasn’t so sure. “Is he going to make it? All the ministers disagree.”

However, Chung and I continued to persuade him and Park finally relented.

Afterward, Hyundai Motor Company entered into a technical partnership with Mitsubishi and began construction in July 1974 on a motor factory in Ulsan.

A few months later, the country’s first domestic car, the Pony, was released, marking the beginning of what is now one of the world’s largest auto companies.

Kia Industry President Kim Chul-ho was manufacturing tricyclic trucks. When I took him to the Blue House, he asked President Park to add a wheel to them.

“What are you talking about?” the president asked.

“I want to produce four-wheeled vehicles,” he responded simply. So Park accepted and Kia went on to develop into a global motor company alongside Hyundai Motor.

I also took a test-drive in the first Tico, the first compact car produced by Daewoo, around the Japanese General Government Building.

But what impressed me most was the Hyundai Shipbuilding Yard in Ulsan, only possible because Chairman Chung won contracts in Europe using only a few photos of a sandy beach, where the shipbuilding yard was later built.

I paid a visit to the yard in July 1973. There, about 30 young employees, all graduates of Hanyang University and Kyung Hee University - both famous for their engineering departments - were working on the floor of an incomplete shipbuilding yard.

At that time, we called the universities the “Oxbone Tower” because the students’ parents often resorted to selling their cows and oxen to pay for their children’s tuition fees. But the Oxbone Tower was also fundamental in the country’s economic development.

There were many businessmen, but I believe Lee and Chung single-handedly made South Korea into an economic power.

We have many symbols: Admiral Yi Sun-shin represents our national defense, and King Sejong is known for the era’s cultural contributions. I wish we could build statues of these two businessmen someday to highlight their achievements - probably behind the statue of Admiral Yi in Gwanghwamun Square. I don’t know when, but I can imagine people paying tribute to the two.

I would also like to see statues of President Park Chung Hee, who modernized the country, and South Korea’s founding father, President Syngman Rhee, be established behind the statue of King Sejong as soon as possible.